Tables aroun the pavement : The publication 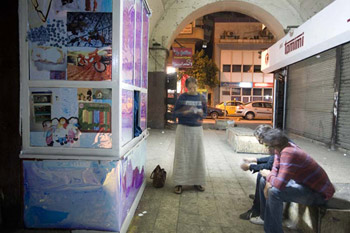 The book launch of TALES AROUND THE PAVEMENT: THE PUBLICATION is the third installment in a multi-staged contemporary arts project curated by Aleya Hamza and Edit Molnar.

Initiated in Cairo in 2007 during Meeting Points 5 Festival, Tales around the Pavement explores the complex relationships and shifting dynamics between people and public space in the context of a mega city like Cairo, in which the notion of public space and its various functions, official and informal, is constantly negotiated and redefined.

The FIRST CHAPTER OF TALES AROUND THE PAVEMENT was staged in the streets of Downtown Cairo. Seven local artists, designers and architects produced new low-budget site and context-specific projects that take an investigative research-based approach to the daily habits of people. Two of the seven works have taken the form of public furniture. The rest of the projects include a portable sound installation, a TV-based public situation, a street graphics project, a series of pictograms, and an interactive installation in an abandoned kiosk. Some of these lasted over the span of a week or more, but most have been ephemeral disruptions of the urban landscape through which this group of artists effectively reinvented some of the guerrilla-style tactics and survival strategies employed by city dwellers on a daily basis in the public arena.

In TALES AROUND THE PAVEMENT: CHAPTER TWO, a similar set of questions and issues pertaining to public spaces in mega cities today from Istanbul to Mumbai were examined by an international group of artists, photographers, writers, curators and filmmakers. This chapter was presented within the framework of a visual arts show at CIC as well as a parallel public program of presentations, lectures and films screenings. Making use of a diverse range media and approaches, from single channel low-tech videos, sound installations to black and white documentary photographs, these cultural producers collectively spin a web of stories that is as multi-layered as the city itself.

In both chapters various concepts of property, privacy, ownership, class, marginalized sub-cultures and gated communities were explored within the narratives presented in the projects and program.

The focal point of TALES AROUND THE PAVEMENT: THE PUBLICATION is the seven projects commissioned for the first chapter of the project. With photographs, illustrations, texts, notes and conversations, this publication seeks to track some of the experiences of producing a series of transient interventions in public spaces in Downtown Cairo. The book launch will be accompanied by a round table discussion with participating artists.

17 February 2008
Book Launch of TALES AROUND THE PAVEMENT: THE PUBLICATION


TALES AROUND THE PAVEMENT has been made possible with the generous support of the Young Arab Theatre Fund, Meeting Points 5, Pro Helvetia: The Swiss Arts Council, Goethe-Institut Kairo and ACAX Budapest