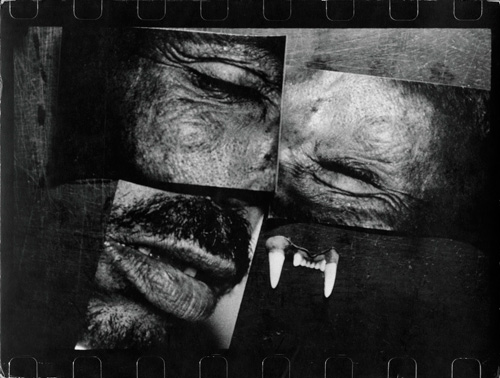 MIGUEL RIO BRANCO Dislecsia
Dislecsia is a large collage of images made by Miguel Rio Branco since his beginning in photography, when he was still mostly involved in painting. The idea of Dislecsia came from the fact that in poetry the way we construct is not necessarily the same as in usual common daylife. For Miguel Rio Branco it is poetic reality that counts. It is not reality that is real, but the way in which he as an artist experiences it and recreates it. On the basis of his ideas and emotions he composes his collages and installations by assembling apparently disconnected images to create one entity. The result is a confounding game with reality. In this sense, Dislecsia forms the key to his oeuvre. It is not only a 'reconstruction' of the work that was lost during the major fire in his studio in 1980, it is also the ultimate demonstration of the way he works. As a whole, composed according to Rio Branco's own rules into an entirely new artwork, Dislecsia affords a surprising insight into Rio Branco's 'different manner of thinking'. Or as he puts it, into the dyslexia that makes him unique as an artist.