Cinthya Soto Pop It Up! 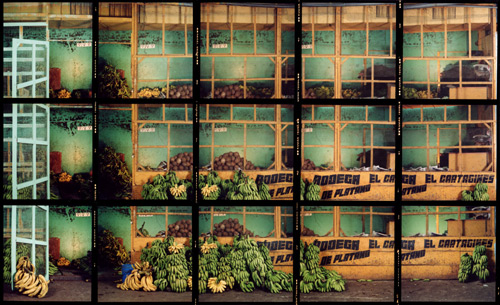 In the series "A (des)tiempo", Soto uses her camera to immortalize public and private spaces characterized by a local aesthetic on the verge of disappearance, which stand in stark contrast to the standardized impulse towards a globalized western aesthetic. A horror vacui reigns in each of the images, which the artist accentuates by unifying multiple views of the same scene. They are fragmented views, multiple framings, various angles, which the artist utilizes to reveal interiors of homes, cobblers, iconographic shops, tailors, florists, fruit vendors-all everyday spaces, which are at the risk of disappearing. The artist constructs large "murals" in which color and composition are significant components. These captivating photographic sequences are the result of Soto's meticulous research and study of such spaces.

Soto's images are a type of "perception phenomenon", which has roots in the conceptual and the emotional, the intuitive and the interpreted, similar to what Jean Marie Schaeffer calls "perceptive emotion", where the effect of the simultaneous is obtained by successive shots which coexist, as in cinema, thus obligating the spectator to reconstruct the chronicle.

Soto, in fact, affirms that she is not a photographer of "a single image", but rather "processes". Processes which we follow passing from one frame to the next, from one detail to another, as in the magnificent images that fill the Taller de Escultura Hidalgo, the color gradations visible in the various flower vases of Floristería Hermanos Ramírez 2006, and the green-yellow sequence formed by the bananas in the Bodega El Cartaginés.

In the new series "Pictografías", Soto examines spatial relationships, which reflect her studies in architecture. With a "Renaissance" eye, she captures unique space-time articulations where we find cubic spaces, the confrontation of an interior landscape, and the sense of simultaneity. In "Pictografías", Soto's pieces are slices of reality which have been transformed through photography, creating a juxtaposition between the painterly and photographic fields with the use of strong vertical lines, or openings which mark contrast--shadow or sunlight--thus breaking the field of vision for the viewer in a suggestive and sometimes playful way. Her pieces show elements of popular urban Costa Rican culture, exemplified in Shamir, 2007, where images of palms and ocean adorn the store's sign. In front of a painted wall, two yellow melons protrude next to a green-yellow watermelon. The round shapes of the hanging fruit are repeated on the table to the right, forming a circular pattern, while the darkness in the background is abruptly contrasted by sunlight which illuminates the table. The repetition of objects such as fruit, plants, and weathered signs becomes a dominant theme, creating a type of motif that is found throughout Soto's work, thus forming an "urban folklore" in which she has emphasized her view and interest in exploring an aesthetic which delights in the quotidian aspects of her place of origin.
All Cinthya Soto's pieces are an embrace towards an excessive reality, which is almost impossible to embrace.
Irma Arestizábal

Cinthya Soto was born in 1969 in San José, Costa Rica, and now lives and works between Zurich and San José. She has participated in various international exhibitions, including: "Artificio Natura", at the Museo de Arte y Diseño Contemporáneo (MADC), San José, Costa Rica, 2002; "Interfaces", Casa América, Madrid, Spain, 2004; and most recently in the exhibition "Territorios", curated by Irma Arestizábal, at the Venice Biennial, 52nd International Art Exhibition, 2007, where she represented Costa Rica in the Italo-Latino Americano Pavilion. Her work is present in many private collections, including the prestigious Martin Marguiles Collection in Miami. This will be Cinthya Soto's first solo show in Italy.