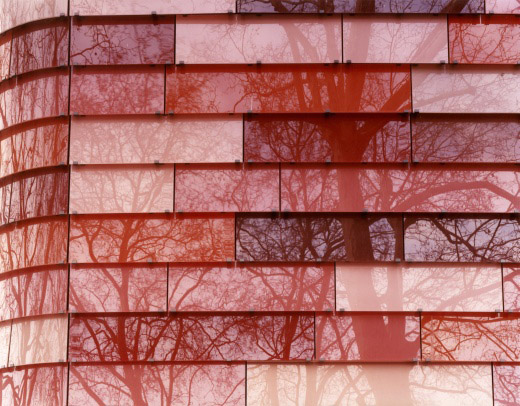 Architecture is the subject matter of Ola Kolehmainen's photographs; however, these are not photographs that document architecture. The building is a source of inspiration. The artist is fascinated by the building's structural compositions, focusing on their details and sequences. This type of architecture abandons the building's three-dimensional quality and transforms it into an abstract object. As well, the facades show reflections, providing a metaphoric meaning that questions the notion of presence and absence. Kolehmainen's photographs are always done on a large scale, allowing them to move beyond their visible parameters, to the point where the eye can no longer see and the imagination takes over.

Ola Kolehmainen, one of the most prominent artists of the Helsinki School," graduated in 1999 from the University of Art and Design in Helsinki (TaiK). His work centers on the exploration of contemporary architecture. Concentrating on the basic structure of architectural façades and interiors, and the strict geometrical order of serial forms, Kolehmainen creates nearly abstract images whose aesthetics are rooted in Minimalism. Disturbing details, called "visual noise" by the photographer, are eliminated, yet there always appear to be elements that undermine the concept of a clear, orderly structure, such as tree branches covering a section of a façade or mirrored façades reflecting a fragmented view of the world outside.