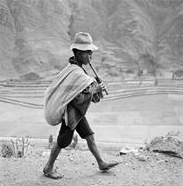 The exhibition offers an entire look over the work of Werner Bischof, the well known Swiss photographer, a member of MAGNUM in the fifties, one of the classics of black and white photography today.

The exhibition is divided into seven sections: Zurich 1916-1945; Post-war Europe 1945-1950; India 1951-1952; Japan 1951-1952; Korea 1951-1952; Hong Kong and Indochina 1952; North and South America 1953-1954. It portrays the chief landmarks in Werner Bischof's artistic work and the successive stages in a career which led him from studio photographer to committed photo journalist. It was as one of the earliest members of the Magnum group of photographers that he won international acclaim.