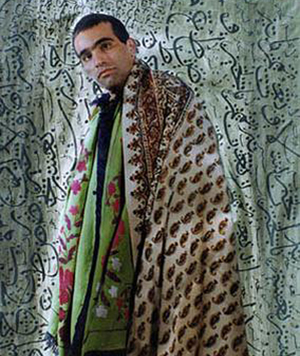 The present day image of the Middle East and specifically Iran as a region of war, oil, fundamentalism and terrorism is one which does not have any aesthetical sense based upon its cultural precedence. The rush of these definitions has not only filled the minds of people from all around the world, but has also affected the self belief of the people of the region. Going back in history, by looking at the political geography when the region was under the dominance of the Ottoman Empire, we can find very clear signs of cultural and artistic creation appearing in literature, architecture and especially in exquisite arts which was the local and sublimed form of the region’s visual arts. From this perspective, the overthrow of the Ottoman Empire and the formation of the new geography of the region and consequently the decrease of the political and economical influence and power of the newly formed countries in international equilibrium gradually caused the decline of the cultural and artistic glory of these lands and the idea of merging with western arts emerged. But should the apprehensions of the contemporary Iranian artist be neglected – the artist who looks deeply at every corner of his land and history and finds hidden beauty undiscovered due to the presence of western taste and approach, who does not want to fight the west or ignore the achievements of the neighboring culture, but is worried about the fall of his belongings into oblivion in the sparkling market of the developed western art? Sadegh Tirafkan, the artist who has chosen photography, the western souvenir, as the medium for his artistic expression was educated, like many other Iranian art graduates, at an Iranian academia applying western educational methods to explore international art theories. At the beginning of his path, when he chose photography as his medium of expression, the themes of his work were his society and surroundings. He tried to add elements to the reality to put in his view as well. Among his first collections, “Empty Walls in Tehran”, which exhibits a different view on the city and “Persepolis”, a debate between the artist and the history, are two different examples. However, his work does not carry on by little interference in recording or reporting a moment. Tirafkan tries to promote his position as a simple photographer to an artist who applies more challenging thoughts. His numerous later projects reveal the artist’s focus on narration as the main element of artistic aesthetics. It is found in a deep search in the distant real and legendary past of his history and land as in the series “Hammurabi” in which the artist seeks an old tale of a ruler unknown by many. With his specific chosen narrative ways, each photo informs the viewer of one part of the story while represents itself as an independent piece of art. During this period of time Tirafkan’s attention is drawn from history and architecture to Iranian aesthetics. Among all the periods of his work and different artistic projects he has exhibited, “Secret of Words” seems to be the most relevant to the present exhibition. After years of research and recreation of the history of art, architecture and Iranian rituals, the artist chooses to work on calligraphy, one of the most distinguished forms of Iranian art. He chooses Nasta’liq, the most Iranian style, which is called the bride of calligraphy together with Shekasteh Nasta’liq among many styles created in Islamic lands since the dawn of Islam. The similarity between Nasta’liq and various portraits from different regions of the country leads the viewer to the mystery and fantasy for which the artist has searched. In his present exhibition, Tirafkan has applied a more detailed view on the Iranian decorative arts. His notice of the carpets and other hand woven tapestries approves the opinion which considers these creations as forms of artistic expression. By doing so he announces that Iranian art – limited to functional goods including carpets, tiles and bowls as a result of political and religious restrictions during the history – is worth revising from aesthetic prospect. The photos of the present exhibition are different figures and portraits each mingled with a relevant form of ancient Iranian art to create independent and new art pieces. In order to express and present his work, besides conceptual detailism, Tirafkan has applied the same precision and perfection exercised in traditional Iranian arts including, miniature, calligraphy, illuminations and engraving – contrary to the present day widespread belief that portrays Iranian art non exquisite, careless and clumsy. Bertrand Russell believed the formation, strength and magnitude of every civilization depended on three elements existing simultaneously: first, the establishment of a political system; second, the employment of the mechanisms of an economic system; third, the development of a creative cultural and artistic system. According to this theory one can say that Sadegh Tirafkan studies different periods of the history of his land in order to recreate corners of the creative systems of Iranian art for the present day audience through the disappearance of political and economic systems.