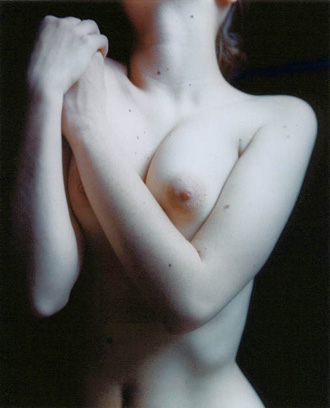 Ruud van Empel Erwin Olaf Cornelie Tollens Carla van de Puttelaar In Erwin Olaf's latest series 'Grief' (2007) he portrais the unhappy, private lives of beautiful, affluent women, evoking 1960s America shortly after John F Kennedy's assassination. Olaf compares the worldwide Grief that ensued to that which followed September 11, 2001. What accentuates the series' poignancy is the contrast between the charmed, external appearance of the women's lives and their internal sense of desolation. Anna Samson for Eyemazing Magazine Cornelie Tollens (1964) surrounds herself in an imaginary boudoir filled with things that she finds intriguing and alluring. Flowers, fruits and fruit, valuable materials such as lace, satin and damask, supple and smooth ribbons and lingerie. But also the secret places in soft, beautiful bodies, and the suggestive soft shapes of life in the sea, as opposed to the aggressive pointed shapes of a beak or a high heel. These are the ingredients of her work in which it is important that the artist herself remains firmly in charge of the complete presentation. Cornelie Tollens uses her photography to illustrate both beauty and creamy innocence, which is not an easy task given the wide selection of guilty objects and accessories. Flatland will bring two new works of Ruud van Empel's Venus series. 'When Ruud van Empel chooses children to play the leading roles, which is in most of the cases, that primitive impulse of desire, that feeling that everything is possible turns into something concrete. Fantasy has no limits and invades the territory that belongs to reality. And we enjoy those scenes created by artists like van Empel because we get a chance to be as naïve, innocent and fresh as those kids staring at us; at least for a moment' Maria Carolina Baulo for Next Level Magazine Carla van de Puttelaar 's intimatie nudes capture young women bathed in a subdued natural light reminiscent of her Flemish predecessors centuries before... She photographs them in an oblique way, teasing us with halfturned bodies, covering hands, closed eyes and details that are delicately sexy rather than overt. Sophie Wright for the British Journal of Photography