This Is War! Robert Capa at Work 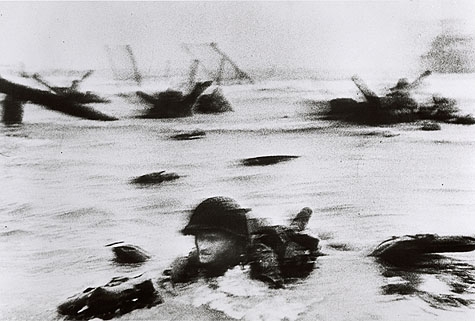 Robert Capa is, without a doubt, one of the leading photographers of the twentieth century. His most striking images all appeared in the pages of the leading picture magazines of the day. This was the context in which Capa worked and was known, and where he honed his skills as a master of the cinematic photo narrative. This Is War! Robert Capa at Work is a groundbreaking exhibition that reexamines Capa's innovations as a photojournalist in the 1930s and 1940s. The title of the exhibition is drawn from the headline of a December 3, 1938 Picture Post story including Capa's images from the Battle of Rio Segre. Never-before-seen photographs and newly discovered documents will illuminate six of Capa's most important war stories. With vintage prints, contact sheets, caption sheets, handwritten observations, personal letters and original magazine layouts, the stories are brought to life and give us a look at how Capa worked. The Falling Soldier, 1936; The Battle of Rio Segre, 1938; and Refugees from Barcelona, 1939, trace his reportage of The Spanish Civil War. China, 1938, document his six-month stay during the Sino-Japanese War. D-Day, 1944, and the Liberation of Leipzig, 1945, present his photographs of World War II.