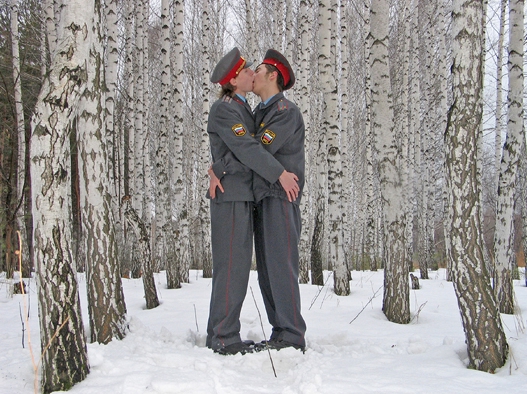 The BLUE NOSES are two artists, Alexander Shaburov and Viacheslav Mizin, both from Siberia. They have become renowned for their series of provocative performances that they have then documented in short video works or as photos. The caustic humour so apparent in their works targets political power structures and media clichés; no one is safe from a biting deconstruction that takes situations to the height of ridiculousness. The BLUE NOSES seem to be particularly attracted to deflating any kind of power, from cultural to sacral or worldly, especially as it is embodied in the Russian mafia, religious institutions or political leaders. Moreover, the BLUE NOSES have zero inhibitions about exposing the contemporary art scene in just the same way: those art trends that look set to limit people's individuality receive the same short shrift as do pompous moral standards. Their taboo-breaking works are created with a minimum of technical effort, with both artists also appearing as the main actors. Yet it is precisely this lightly ironic approach that facilitates the viewers' access to the works. Nonetheless, not everyone understands what the BLUE NOSES are doing in their works – one reason why they have repeatedly come into conflict with institutions such as the Russian-Orthodox church and the Russian government. The "Learning from Moscow" exhibition, running from 24 May to 2 September 2007 in the Städtische Galerie Dresden, had to manage without several pictures by the BLUE NOSES . The works had been confiscated by Moscow on the grounds that they were a "political provocation". Around two weeks ago, the Russian Ministry of Culture cited the same reason to "recall" several dozen works scheduled to be exhibited in "Sots art: Political Art in Russia from 1972 to Today" at the Maison Rouge in Paris. The bone of contention this time was, first and foremost, the "An Epoch of Clemency" which shows two Russian policemen kissing in a snowy birch wood. Alexander Sokolov, Russian Minister of Culture and Mass Communications expressed the view that "If this exhibition appears (in Paris) it will bring shame on Russia. In this case all of us will bear full responsibility". DIEHL PROJECTS will be showing all the censored works. The artists will be present at the opening