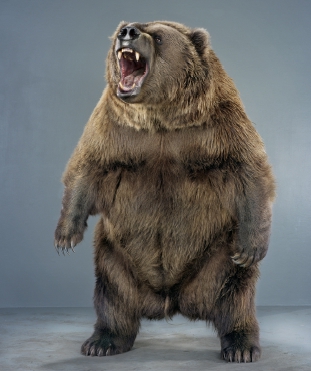 Jill Greenberg first established her artistic reputation as a preeminent celebrity photographer, shooting such Hollywood personalities as David Bowie, Liza Minelli, Drew Barrymore, Clint Eastwood, Tom Cruise, and many more. Her images have appeared in numerous prestigious periodicals including Time, Wired, Entertainment Weekly, and Rolling Stone. In 2001, Greenberg turned her lens on celebrities of a different sort—namely monkeys and apes, many of whom have appeared in film and television roles. These brilliant portraits were warmly received, and paved the path for photographs of a wide range of other animals, including most recently bears. Constructing outdoor studios in Calgary and Vancouver, Greenberg photographed grizzlies, black bears, and a polar bear, among others. As with her celebrity photographs and monkey portraits, the artist captures an astonishing array of personalities, expressions, and emotions in her ursine friends. Printed on a massive scale, Greenberg's bears insistently demand our undivided attention; yet the gorgeous prints also seduce us in a subtler (and perhaps more powerful) manner with their sensuous, painterly textures achieved by the artist's expert digital finishing.