Yasumasa Morimura My Life Through A Looking - Glass 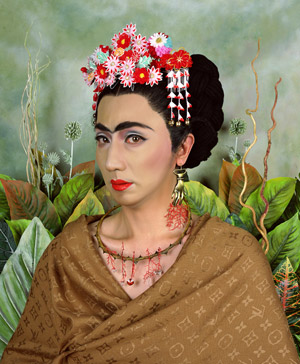 Reflex Art Gallery in Amsterdam presents an exclusive look at the polaroids and working methods of a leading Japanese master. The work of Yasumasa Morimura exists in a theatrical world between photography and performance. The artist purposely leaps across cultures and eras, overriding issues of gender and race, casting himself in a wide variety of roles. He imitates Madonna, Michael Jackson and other icons of American pop culture as well as slipping into the skin of a stereotypical Japanese matron obsessed with Chanel and Louis Vuitton. His cultural cross-dressing includes the pomp and lushness of the surrealist paintings of Frida Kahlo, and captures the nuances of the nameless heroines in Cindy Sherman's photographs. As the "Daughters of Art History", he reconstructs masterpieces by Rembrandt, Vermeer, Goya and Manet, using elaborate costumes and irony to question the sanctity of Western art and our concept of the value of originality. This is a multi-level charade - a middle-aged Japanese male playing historical female roles in which the gaze is commodified and objectified, then slyly turned back on the viewer. Meanwhile, in Morimura's hybrid self-portraits as the goddesses of the silver screen (Liz Taylor as Cleopatra, Jane Fonda as Barbarella, Audrey Hepburn in My Fair Lady, even Sylvia Kristel as Emanuelle), it is difficult to distinguish between what is recreated, what has been retouched and what is digitally manipulated. For him, the Mona Lisa is as legitimate a target as the young Marilyn Monroe spread out in her celebrated Playboy centrefold. Each icon is instantly recognizable as being part of our collective consciousness, but as a chameleon in disguise, the artist places his own significance on each subject. He simultaneously deconstructs and subverts glamour and authenticity, sometime providing biting social satire. More recently, Morimura has been focusing on depicting political figureheads - Mao, Lenin, Che Guevera and Charlie Chaplin dressed as Hitler, or recreating famous photojournalistic pictures from the Vietnam War, his response to the current worldwide battles for power. While working on his compositions in his studio in downtown Osaka, the artist makes numerous polaroids to study the visual effects as each of his masquerades develop. They are provocative and sometime incongruous, smaller in scale, and less detailed than his finished works. Sometimes a prop or merely a suggestive pose indicates the icon he is mimicking. Since many of Morimura's works include himself in the roles of multiple characters, we see the way he manipulates the perspective between the various elements. Unlike the polished final portraits, some of these studies show uncertainty in his eyes, trickery in his stance or a discomfort in his pose. This sense of intimate humanity makes these polaroids unusually appealing. The isolated polaroids also reveal the disjointed nature of staged photography, whereby the reality is often more absurd and the set-up less believable, than it appears in the finished artwork. As in a film still, the sense of performance is pivotal. The polaroids show the care that goes in to the preparation of both fidelity and fiction. The heavy makeup accentuates the inherent fakeness. "I don't do my painting on a canvas," says Morimura. "I do my painting on my face." Jonathan Turner, critic/curator For a quarter of a century, Morimura's self-portraits have been featured in important solo exhibitions in such institutions as Chicago's Museum of Contemporary Art, The Cartier Foundation, Site Santa Fe, the Hara and Yokahama Museums in Japan and at the 2007 Venice Biennale. This exhibition of 200 polaroids along with a selection of his related large-scale, finished images is the first time that Morimura's fascinating processes of creation have been so clearly laid bare. Based on this unique exhibition, Reflex New Art Gallery will publish a book in close cooperation with the artist, which will contain an overview of his oeuvre and studies. The exhibition will be opened October 27 and end December 15. Please find attached images from the following series by Yasumasa Morimura: "An Inner Dialogue with Frida Kahlo" (Dialogue with Myself, Cropped Hair, Handshaped Earring), "Selfportrait as a Movie Star" (Elizabeth Taylor as Cleopatra, After Marilyn, White Marilyn, Red Marilyn), "Mona Lisa in Pregnancy" and others. For more information and/or images of high resolution please contact Viola Winokan or Alex Daniels.