Hand To Mouth by Tessa Bunney 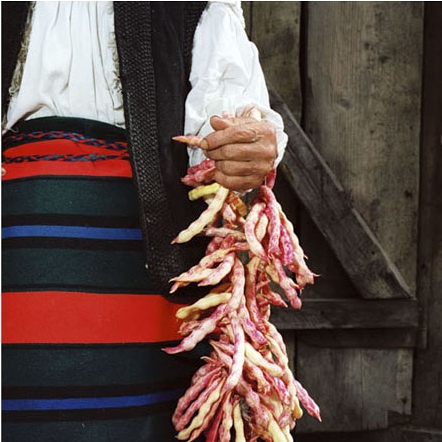 Hand to Mouth, a new exhibition and publication of photographs by Tessa Bunney, premieres at Impressions Gallery on 13 October. Commissioned by Impressions, Hand to Mouth explores the lives of villagers and nomadic shepherds in Romania's Carpathian Mountains. You can see a portfolio of Tessa Bunney's work at http://www.milim.com/new-work.php Over a period of four years, Tessa Bunney worked closely with these communities, spending prolonged periods travelling amongst villages and shepherd camps. She explains, " I would walk along cart tracks and dirt roads, photographing the people I met on the way - peasant farmers working the fields, women walking along knitting in the street". As the title Hand to Mouth suggests, these people survive precariously by their own labour, bringing a new reality to our often-idealised notion of self-sufficiency. Bunney takes us on a journey through the seasons, witnessing the changing landscape and the rhythms of rural activities: cheese making, crop harvesting and sheep milking. Her photographs reveal a way of life that is at times idyllic, yet often harsh. With Romania's new EU membership and its associated health regulations, this mountain culture, rich in traditions linked closely with the land, is now under threat. Bunney says, "I hope these rural communities are given some choice in the direction of their future, and that their culture and the unique landscape they inhabit is not lost for ever". Tessa Bunney gained an MA in Photography from De Montfort University, Leicester in 2004. Bunney's previous projects include Moor and Dale, which was exhibited and published by The Mercer Gallery, Harrogate, and shown at various venues in the UK including Hereford Photography Festival, 2004. Eat Better, Eat British received an Honorable Mention in the Leica Oskar Barnack Award and was shown at Rencontres Internationales de la Photographie, Arles. Lamb, commissioned by The Culture Company, was shown at Impressions Gallery, York, in 2000. Bunney has undertaken residencies at the Artist Centre of Inari at Koppelo, Northern Finland, and the Gil society studio-workshop, Akureyri, Iceland. She is currently working on a new project looking at domestic labour in the suburbs and villages in and around Hanoi, Vietnam.