Eyes of an Island 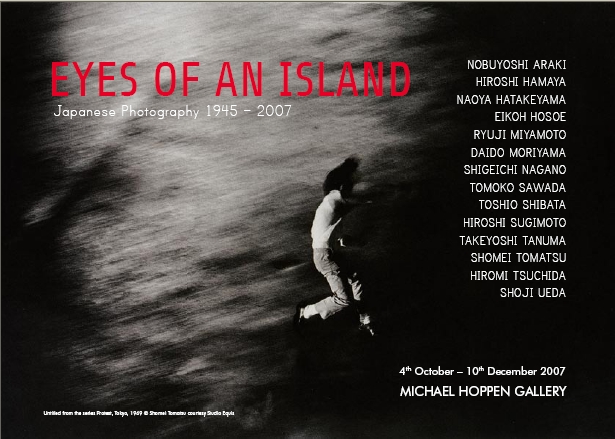 The Michael Hoppen Gallery, in collaboration with Studio Equis, is delighted to announce a major exhibition of influential Japanese photography dating from 1945 to the present day. This exhibition will bring together some of the most important and iconic images by recognised masters including Shomei Tomatsu, Daido Moriyama, Hiroshi Hamaya, Shigeichi Nagano, Hiromi Tsuchida, and Eikoh Hosoe. Whilst much of this work has been exhibited at major museums world wide: this exhibition is a rare opportunity for this work to be re-examined face to face. Eyes of an Island also integrates more recent work by well-known photographers such as Hiroshi Sugimoto, Ryuji Miyamoto, Naoya Hatakeyama and Nobuyoshi Araki amongst others. We will chart three stages of development in this period of Japanese photography: from post-war documentary bearing witness to the destruction of war; turning inward to personal and subjective interpretations of the rapid changes in Japanese society; to a contemporary movement which consistently pushes the boundaries of the photographic medium. These photographers illustrate the diversity and virtuosity of the unique Japanese visual language. Japan has been at the forefront of photography throughout the 20th century: photography was both a product of and a driving force in modernisation. With the post WWII economic boom Japan began to mass-produce the highest quality equipment and film in the world leading to a staggering photographic output. However, the main platforms for Japanese photography were magazines and books, and as a result very few exhibition quality vintage prints have survived. Coupled with both the� the decades immediately following WWII has not previously been seen in Europe and the US. Guiding Light publications and Studio Equis will be producing a limited edition 100 page hardback book