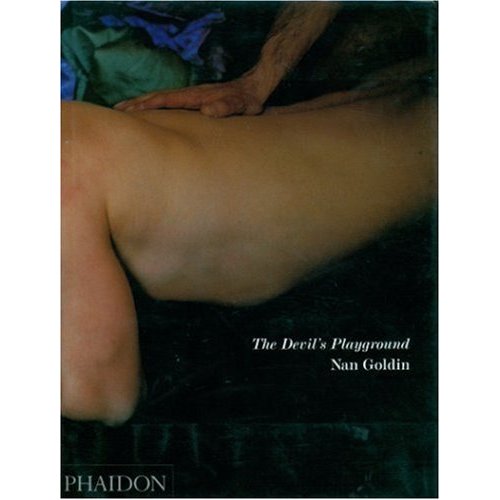 Dating mostly from 2000 to 2002, this latest collection of photos from '80s star Goldin broadens her exploration of intimacy to take in first loves and births, along with the usual chronicling of accidents and illnesses, drug addiction and recovery, age and loss among friends and family. Throughout this nearly 12"×9" collection, the body is always primary, and often unabashedly fleshy. The ease with which Goldin captures her friends and relatives showering, relaxing on a bed, or in the midst of lovemaking is impressive, establishing both the reality of the moment while simultaneously bathing her subjects in her loving, third-party glow. Texts include pieces by Leonard Cohen and Nick Cave, along with New York downtowners John Giorno and the late Cookie Mueller. While Goldin's work is often compared to Diane Arbus's, in that both photographed the so-called "marginal" members of society, rather than using the lens as a distancing, voyeuristic tool, Goldin equalizes viewer and viewed. Through the lens of familiarity, the photo becomes less an exploitation than a connection. Homosexual, transvestite, straight, scarred, tattooed or simply uniquely shaped, everyone has relations-and Goldin does not exempt herself, as two sections in the book follow her struggle against heroin addition. While the 460 shots here are printed in gorgeous color, many of the photos are unfortunately situated across a two-page spread, with the central human figure often disappearing or elided into the gutter, at odds with the overall intention of the collection. Copyright © Reed Business Information This is a major collection of photographs by Nan Goldin, representing over 35 years' work. This significant body of work begins in the early 1970s with her "Dazzle Bag" portraits and her series of photographs on themes of maternity, family and landscapes. The book contains Goldin's new and recent photographs in narrative and thematic sequences such as "Landscapes", "Self-portraits", "Maternity, Heartbeat" (2001), "My French Family" (1999-2001) and "57 days" (2000), many of which are previously unpublished. It also contains some of the "drag queen" photos of the mid-1990s, the "Cookie Mueller" portfolio of 1989 and the "Ballad of Sexual Dependency" images from the 1980s. Goldin's early black-and-white photographs from the Boston years in the 1970s also form part of this substantial collection. Nan Goldin's photographs are intimate and compelling - they tell personal stories of relationships, friendships and identity, but at the same time chronicle different eras and the passage of time. Their subject matter ranges from drag queens and AIDS to the family, maternity and most recently, nature and landscapes. Laid out in chronological sequences by the artist, like a diary, the material is both candid and affirmative. In addition, a number of short essays are interspersed throughout the photographic sequences. Individually, these texts discuss different aspects or themes in Nan Goldin's work such as the narrative, love and gender politics, while also referencing particular works such as the "Ballad of Sexual Dependency" (1981-96). A conversation between the artist and Catherine Lampert, freelance curator, former director of the Whitechapel and close friend of Goldin, touches on the sources of her inspiration and her life as a prominent artist. Broché: 504 pages Editeur : Phaidon Press (1 octobre 2007) Collection : PHOTOGRAPHY Langue : Anglais