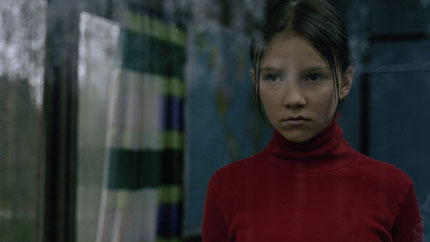 Finnish artist Salla Tykkä will show two film installations in the RHA in September - the Cave trilogy (2000 - 2003) comprising the works Lasso, Thriller and Cave and the Irish premiere of Zoo (2006). A series of photographs from the Blackwater series will accompany the installations. Tykkä's trilogy Cave is centred on a female protagonist and, using 3 different actresses, loosely charts the transformation and growth of a woman as she journeys from childhood to adulthood. Concerns surrounding sexual identity and the problematic issues surrounding the female as object are prevalent in this work. Tykkä attempts to subvert this image of the female as passive object of the male gaze by creating a central female protagonist, in contrast with the classic films of the 1950's that tend towards the male as central to the narrative action. Lasso (2000) shows a young girl standing outside on a frosty day , peering through the blinds of a window at a bare chested man as he frenetically jumps through a lasso he is twirling. She is the spectator and he is the object of her gaze. The gentle tones of Ennio Morricone's theme for Once Upon Time in the West adding to the intimacy of the girls secret stare. Thriller (2001) is also set in bleak Finnish wintertime. A restless teenage girl commits an apparently random violent act, the tension heightened by the use of John Carpenter's soundtrack for the film Halloween. Cave (2003) shows a young woman dressed in white overalls trying to dig into the frozen ground of a cave. She observes miners drilling into the rockface, the sound of the drill has been muted, before finally kneeling at a water pool and sinking her hands into the soft sand of the pool. Zoo (2006) is one of Tykkä's most complex works to date. Centred around a female protagonist reminiscent of a 1950's screen actress such as Grace Kelly or Tippi Hendren, the woman walks silently around a deserted zoo. As with all of Tykkä's work, the film is without dialogue, the narrative action and soundtrack creating both atmosphere and open reading to both meaning and apparent symbolism. The zoo itself plays an important role in the heightened atmosphere, a sense of foreboding looms, creating an obvious link to the Hitchcock classic, The Birds. The woman walks silently around the set, pausing at times to take photographs. The act of looking through the aperture causes a flashback to a frenetic and violent underwater rugby game, a metaphor for a struggle between the act of survival in unnatural surroundings and the act of working within the group structure. As the film progresses, she becomes the observed. The camera follows her increased panic and fear, only for tragedy to ensue. Salla Tykkä was born in 1973 in Helsinki, Finland, where she lives and works today. She graduated from the Academy of Fine Arts in Helsinki 2003. She has been working with photography, video and film since 1996, and had her first solo show in 1997. Her latest solo exhibitions include: Chapter Gallery, Cardiff, 2006; S.M.A.K., Gent, 2006; De Appel, Amsterdam; Museum Het Domein Sittard, 2006; Centre pour l'image contemporaine Saint-Gervais Genève, Genève, 2006; Yvon Lambert Gallery, New York, 2006 and Portikus, Frankfurt am Main, 2005. Salla Tykkä's films have been shown at international film festivals including the 36th International Film Festival Rotterdam, Rotterdam, 2007; 21st Brest European Short Film Festival, Brest, 2006; Tribeca Film Festival, New York, 2003; International Short Film Festival Oberhausen, Oberhausen, 2003 and 2002.