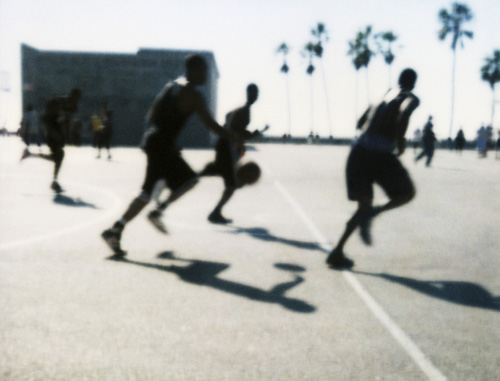 Flashback: Large Cadillacs in green and gold metallic. Tight Lacosteshirts and trousers made from 100% polyester, while on TV premiers the first season of Kojak and Dallas. The Studio 54 is the place to be and a grey-headed art genius is shooting photos of hollywood stars and friends alike with and on an ingenious material that develops itself and on itself. Back in the days the sun was brighter and photos ever so gleaming with colors. It was the time of hedonism in the 70's and 80's, captured by beautifully sculpted, leathery fold-away cameras, which seemed to resemble a SciFi utensil aboard Starship Enterprise. These days marked the birth of SX70. Polaroid SX70, back in the days, was equivalent to a luxury good for courageous fools willing to sacrifice being in absolute control of the picture. However, even today, these photos are a symbol of quenching life and displaying anything displayable. SX 70's polaroids are spreckled with the atomic particles of the Genius Loci. They plummit from the camera's casing and right into the scenery of the picture itself, are waved in the most caressive manner. They are unique, they age and they combine negative and print in one. No other photographic medium is capable of the fragility and sensitivity that Polaroid SX70 delivers. A quadratic picture format, a glossy finish, an integrated chemical emulsion on a flat surface and a fixed passepartout with holding strip - these qualify as the attributes of this breed. US drugstores and Seven Elevens prove until today that SX 70/600 catridges are still available in the age of digital photography. Billirubin gallery's first exposition displays 45 works from photographer Philip Glaser, which capture the unique atmosphere of a past era. Pastell color tones, soft contrasts, a touch of picture corns and bluriness. These photographies, seemingly timeless, appear like a mélange of melancholy toward and a tribute to an apparently past era of pictures. Ultimately, this exposition highlights the indivuality of each photography and stands in stark contrast to digital imaging.