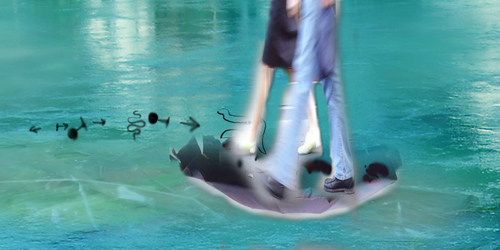 The Il Frantoio gallery opens Giusy Lauriola's solo exhibition on Saturday July 21st, The exhibition is called G.O.D. - Glance or Obscurity Determination – and is curated by Gianluca Marziani. An international preview of the exhibition will take place at Monte-Carlo's World's Artists Artemisia Art Gallery on June 26th. Then, following Capalbio, it will continue from September 1st to September 15th in the Swabian Castle of Manfredonia, in the region of Apulia. The artistic project draws inspiration from the highest of human needs: the thought of what exists “Beyond”. Giusy Lauriola maintains an ideal continuity with her artistic research, particularly after the work she carried out during the Iraq war period - “Cambialamore” (“changelove”), where she reported other people's pain and indifference through a 30-meter long complex project. Today, she seems ready to placate the feeling of impotence, and move to a field where the thought of a plausible “Beyond” can save us from desperation. If British artist Damien Hirst investigates into the concept of death by showing a dead shark in a tank of formaldehyde, why not look for additional answers to the concept of death, maybe drawing our inspiration from a possible inherent world? If Thomas De Quincey - an English novelist from the 19th century - used to write after drinking laudanum - maybe to feel closer to all his dead beloved ones - why not try to imagine what we cannot see thought art? Pictures with crystal-clear water; moments of real life taken away from daily routine and made magic; rarefied skies where various objects are soaring, unreal passer-byes, indefinite imagines of angel-women as if they where the souls of things and people that, now, somewhere else, might see other people's pain as a minor little event vanishing in the immensity of eternity. The images of a black and a white umbrella rotate, as a reference to the dark and the bright sides of our lives. Forms come out as mysterious phantoms, a kind of alchemy where mystery becomes the new form of a calm that is still achievable . The works mixes various languages with a unique approach: photography, digital processing and painting technique on Plexiglas stands. The project is completed by a film and a series of light-boxes made with some frames taken from the film, maintaining both thematic and stylistic homogeneity.