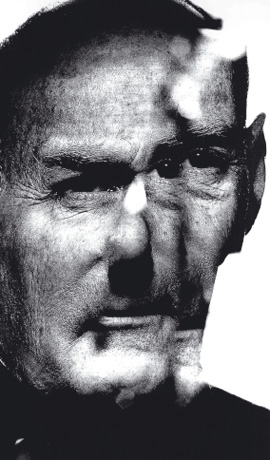 The great American photographer Irving Penn is celebrating his 90th birthday on June 16th 2007. To show all our respect, the idea to produce a group show came up, that combines work of young and established photographers. Mr. Penn's influence on the developement of photography in the second half of the 20th century reflects in the numerous examples of photographic works, in which you find elements that Mr.Penn has already used in his work. This starts with the choice of subject, in the broad span of portrait to fashion and stillife and to the use of specific backgrounds. It is not surprising at all, to hear the same story from many photographers: Mr. Penn's photographs have been objects of intensive study and these studies influenced the photographers careers. The photographers we asked for participation reacted enthusiastically and ensured their collaboration. They do stillife, fashion and portrait, so have a varied view upon Penn's work. The works in the show are either especially made for the show or in some cases earlier work. Accompanying this exhibition, we will publish a book which is limited to 90 pieces, printed in A3 format on Hahnemühle PhotoRag 188g paper. It contains all works shown in the exhibition and a very profound text by renowned art historic Isabelle Moffat. This exclusive book will be available at aplanat galerie für fotografie or at the bookstore of the Internationales Haus der Photographie in Hamburg. The private view will begin on June 16th 2007, starting at 5pm at the aplanat galerie für fotografie, and the exhibition will be held from June 19th 2007, to August 4th 2007. Here is the list of the photographers who are involved: Manu Agah | Christian von Alvensleben | Alexander Babic | Jens Boldt | Bert Brüggemann | Chon Choi | Uwe Düttmann | Gabo | Peter Godry | Frank Goral | Prof. F.C. Gundlach | Esther Haase | Oliver Hadji | Beate Hansen | Hans Hansen | Roswitha Hecke | Olaf Heine | Christian Hiltawsky | Volker Hinz | Enver Hirsch | Peter Hönnemann | Jay Mark Johnson | Wolfgang Kampz | Maike Klein | Anatol Kotte | Tim Kubach | Serge Marcel Martinot | Bianca Radziwanowska | Jim Rakete | Philipp Rathmer | Barbara Rix | Jürgen Röhrscheid | Thomas Rusch | Walter Schels | Sehnaz Seker | Sonia Sieff | Frank Stöckel | Vlad | Prof. Gerhard Vormwald | Tony Ward | Volker Wenzlawski | Michael Zibold.