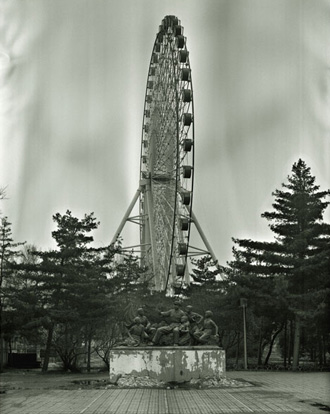 m97 Gallery is pleased to present "Theme: Park", two black-and-white solo photography exhibitions by Yan Cheng and Yan Changjiang. Yan Cheng's series of photographs titled "Echo" is a still reflection on the time-worn amusement parks in China's rust-belt city of Shenyang. Yan Changjiang's series "Zoo at Night" captures the freedom and confinement of wild creatures roaming the darkness in an animal park on the outskirts of Guangzhou. Without focusing on the public, both bodies of work are explorations of man-made public space, theme-park-like creations for human entertainment, human consumption, and human escape. Yan Cheng's "Echo" photographs are a meditation of silence in the city, an urban playground, void of people. The rusted rides and roller coasters somehow embodying the innocence of the children that once played upon them. Evoking a sense of nostalgia through his photographs, Yan Cheng's "Echo" series is a testament to the passage of time and the ever-changing pleasures and pastimes of modern society. Now replaced by internet bars, video games, and a barrage of electronic and virtual entertainment, "Echo" asks the viewer to consider the notion of innocence lost and to ponder the profundity that can be found in something as simple as a day at the park. Yan Changjiang's "Zoo at Night" photographs depict animals on display and others roaming the darkness within the confines of a nighttime zoo. Giraffes juxtaposed with light poles, flamingos under floodlights, antelope running across paved paths. Yan Changjiang's photographs attain a "magical realism" through his use of lighting as well as the exotic creatures that become his suburban subjects. In the end, the metaphor of his work implies that we the viewers are just as much the animals on display, at times running wildly through the night, at times looking for respite from the glare of the artificial street lights, all within the boundaries of our own theme park.