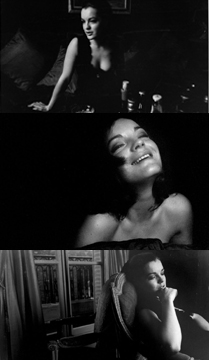 On the occassion of the 25th anniversary of the death of Romy Schneider, Will McBride will be signing his book "Romy", published by Knesebeck, in our gallery. The book signing will be on the 2nd June 2007 from 2 pm to 4 pm in the context of a special show. The reportages of Will McBride, born 1931 in St. Louis, USA, were a scandal in postwar Germany; but it was them that made him famous in the 50ies and 60ies. The portrait of his pregnant wife Barbara in profile, the photographic documentation of the birth of his son as well as the book of sexual education "Show Me!" are only a few examples. In 1964 he portrayed the actress Romy Schneider, then aged 25, for the magazine "twen" in Paris. The extraordinarily sensual portraits were long forgotten until Mc Bride rediscovered them in 2002. Romy Schneider, born 1938 in Vienna, lived a turbulent life, affected by strokes of fate. With 20 she met the love of her life, Alain Delon. After 5 years of living together, only a few months before the photo session with Will McBride, he left her for another woman. As the child of two actors, Romy was raised by her grandmother and later on visited a boarding school. She was married twice - both marriages got divorced. Her son David-Christopher died, aged 14, in an accident in 1981. Only 10 months after this tragic loss, Romy Schneider died on the 29th May 1982 in Paris by heart failure. She left her 5 years old daughter Sarah. On a day in autumn in 1964 in Paris, Will Mc Bride found Romy Schneider in an extraordinary condition: The pain about the separation from Alain Delon, Romy's disorientation and desperation, but also her zest for action and the immense pleasure in flirting with the camera resulted in manifold portraits. They show a sensual, erotic, lascivious, but also sad, fragile and absent Romy. Will McBride empathetically captured the personality of such a multi-faceted young artist like Romy Schneider was on this afternoon.