Kyungwoo Chun Versus and Believing is Seeing 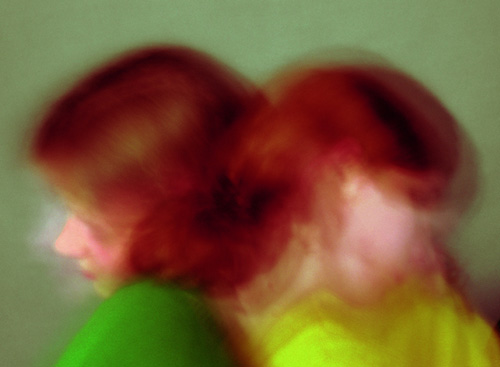 This first color-photographic series 'Versus, 2006-2007' is dealing with interpretation about human relationship like many other works before and inspired by the shape of an old Chinese word 'ren' which looks like a walking man and has the meaning of 'man'. This word was created from the meaning that nobody can stand alone and always need someone to stand. People in this series are asked to sit and being leaning for about 30 - 45 minutes which is the number of the added ages from two young women. One couldn't stay alone without being leaning to the other one and the colors of the spaces are influenced by their cloths and hair color through the extremely long exposure time. One used to be comparing or being against to someone to see oneself but at the same time becoming realizing one's own statement. People are living with being much influenced by one much closed person who love and also feeling the others pain or happiness as if two people are in a body. Ironically we recognize our own face only through that of somebody else.