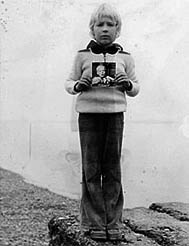 Our series of exhibitions titled Werkschau is in its twelfth year celebrating contemporary photographers who have made significant contributions to artistic photography in Austria. This year's version is dedicated to the Vorarlberg artist Gottfried Bechtold whose artistic career has spanned almost 40 years. Gottfried Bechtold is one of the most outstanding and multifaceted artist personalities of our time. Both interdisciplinary as well as multimedia define his work. His main interests include expanded sculptural ideas that conceptually manifest themselves in his video and film works. WERKSCHAU XII focuses on 3 different bodies of work plus a new installation created by the artist. Bechtold's photo series covering many years “Bild im Bild” (picture in picture) for example Fazilet and his “Reisebilder” Standbilder travel and status photos from 1971/2001 and in the cinema his “Fotofilme” will be shown. In a small exhibition space we will show Bechtold's newer works with a working title of Der verkehrte Blick (The reverse look) an installation with cameras, tripod like characters and boards of text. The camera as auratic object – a time witness. The apparatus as “shutter” of pictures with double meanings the physically perceivable and the introverted picture. It suffices to arouse the viewer with these time bound gadgets. The questioning of time and space dimensions in Bechtold's newer works just like in his earlier photographic and film pieces play an important role. Characterized by the constant role reversal between documentary and conceptually styled methods, different levels of reality as well as a discourse with the sense of touch.