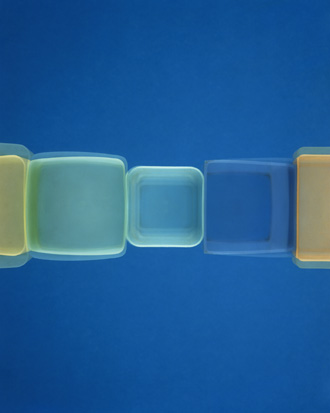 The early work of Richard Caldicott is in dialogue with the tradition of the photographic still-life and its reference into abstract painting. His objects of plastic everyday day Tupperware are taken out of its context and are canonised into the realms of 60's abstract art in a post modern, humorous manner. As Christopher Schreier writes: "Of a quite commanding, space-impinging presence, their dispute with painting, however, lies on a different, non-metric level. Even a first impression reveals the painterly qualities of his art. what we take in is summed up in a phrase Eugene Delacroix once coined for painting, namely "sensations colourantes", the visual sensations that seem sufficient unto themselves and the eye of the beholder. We may be tempted to regard these pictures purely for pleasure, and indeed the works' subtle play of colour and form suggests this response. Caldicott's works cultivate an aestheticism that makes the viewer almost forget that these photographs possess an outside reference. Seen purely as motifs, they go back to an inventory of plastic dishes or containers, mostly Tupperware, that in the early and mid-nineties Richard Caldicott piled up into imposing plastic structures. Although one might identify an individual salad bowl or lemon squeezer, the total form possesses a sef-referentiality that Caldicott has developed in later years. The ironic contrast between an apparently modernist-constructivist sculpture and the reality of its trivial, everyday substance, is no longer really the issue. It may have been a sign of (English?) humour, but Caldicott's art has always meant to be earnest. His concern is the metamorphosis of the everyday, which for him has something almost alchemical about it. This unquestionably goes one step further that photography's chemical transformation of reality into two dimensional pictures at the touch of a button. The works show that he is aiming for a kind of transmutation of the functionality and entity of everyday objects in to two dimensional pictures at the touch of a button. The works show that he is aiming for a kind of transmutation of the functionality and entity of everyday objects into the shimmering presence of simple translucent forms" In His newest series of work Caldicott completely leaves the realm of the photographic object and deals directly with abstraction in itself. Daniel Buren maintained that "colour is the most interesting thing in art because it is the only thing you cannot speak about". It is with this in mind that one should look at Caldicott's work. Working from collages and assemblages and then photographed stringently, by different techniques and presented as a photographic object in itself, his work has evolved, where. the object as subject has disappeared altogether, leaving only what were formerly colour backgrounds arranged in abstract, geometric compositions that constitute autonomous objects in their own right. In his images the collage, however, is never 'stuck down' it is only the process of photographing it that fixes the final result into an object. Derek Horton writes: "It is significant that Caldicott refers to his latest works as "Constructions", a term that simultaneously suggests the manual making of things and a connection to constructivism and architecture. Furthermore there is also a direct link to the minimal art era and Donald Judd's Specific Objects , "holistic and unified art objects that are neither painting nor sculpture" For its maker and viewer alike, Caldicott's art involves looking back into constructivist art and modernist design, referencing its purity of form and, by indirect allusion at least its utopian agenda...Whilst his work may suggest that Caldicott is an 'unreconstructed modernist', it is arguable that it is impossible now to make work 'as' a modernist - one can only refer to modernism or to use a term beloved of post modern theorists 'cite it'. For much post modern art such citation relies on pastiche that critiques or even lampoons modernism and its values., but for some artists of Caldicott's generation, who were exposed to post modern pastiche at its peak in the 1980's, it is possible now to look back to modernism from a different perspective, to be outside it but remain in many ways respectful or admiring of it" (Derek Horton Seeing through Modernism: Transparency, absence, construction)