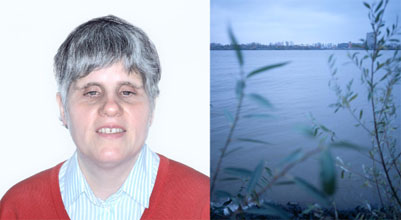 "What images emerge, when they are initiated by people, who are not influenced by the visible world? In my photographic work I want to question the dominance of the visual sense; of images, their function and objectivity. Thus the perception of reality in a world ruled by visuality is confronted with a picturefree world. Blind people choose by own criteria a place they want to describe and capture it with words. They give me directions to take the picture, I have no influence on the choice of motif and my role is to take a neutral as possible image of the visual reality. I get surprised by the motifs they present to me and the reality of the blind people. The description of their perception of reality is captured on a media. In the typographic presentation I give the typical elements of spoken language a code to reproduce the individual way of speaking. This way, very personal images of language show the rhythm of speech, and the way each individual reflects his perception of reality. The photographs and the descrpitions of the places produce as a result a new image of reality." Bianca Radziwanowska