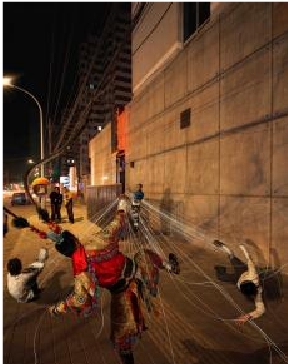 Chi Peng, barely in his mid-twenties and already an internationally recognised artist, is considered to  be o ne o f the most groundbreaking and innovative exponents o f contemporary Chinese art avant-garde. This is due particularly to  his superior handling o f digital photography and image-editing. He skilfully fuses actuality and fiction to  an artistically generated pseudo-substantiality. Chi Peng is a classical first-person narrator. Already in his early works he repeatedly became a figure and part within his o wn artistic creation. Digitally animated and frequently multiplied, his o wn 'alter ego' becomes a recurring projection-screen in a partly painful reflection o n the urban realities o f today's China - o n new dreams and o ld taboos, o n the still stigmatised issue o f homosexuality. Yet, with all its graphic modernity and airiness, his art does not hover in a vacuum. In his latest series o f works he turns towards a subject matter deeply rooted within Chinese mythology. He takes up a classical novel, written in the 16th century by Wu Cheng'en and actually famous far beyond China as "Journey to  the West". In the eighties o f the 20th century it not only served as substructure for a very popular series in Chinese television, but also  for Manga- and Anime-sequels (such as Dragon Ball /Z), thereby becoming an inherent part o f modern western pop-culture. The story describes the fantastic journey o f the monk Xuan Zang to  India, with the aim to  bring Buddhist sutras back to  China. The actual hero o f the narration, however, is the smart and rebellious monkey king Sun Wukong who is endued with magical skills. Among o ther things he is able to  transform himself into  72 different shapes and creatures - a character almost predestined to  serve as 'alter ego' for the artist. We accompany him o n a journey that is both a fanciful adventure and a story o f spiritual sublimation. But Chi Peng is not interested in mere illustration. He transfers the elements and figures o f fantasy into  the seemingly real world of contemporary China, yet not relinquishing its mythical and magical qualities. As he has already done in the past, Chi Peng works with exceedingly long, respectively narrow formats reminiscent o f ancient Chinese scroll paintings. In the process, tradition and modernity merge not o nly thematically, but also  formally. Chi Peng uses the means o f art to  create a parallel universe in which the distinction between reality and cyberspace seems to  be repealed. He takes us with him o n a passage to  his o wn childhood, which at the same time becomes a spiritual pilgrimage from the Tang-dynasty to  21st century China. Text: Anke Mueller, 2007