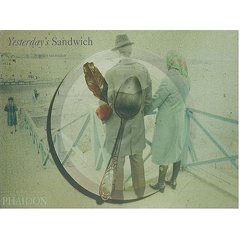 First Book Ever Published on the Early Work of Russia's Most Influential Living Photographer Russian photographer Boris Mikhailov (b.1938) described the political climate of his homeland in the late 60s and early 70s as "a period of hidden meanings and coded messages." Inadvertently he produced a body of work during that time that parallels that encrypted reality--an assemblage of conflicting elements that reflect the dualism and contradictions of Soviet society. The simple act of overlaying two slides created a scene in which fact and fiction could interplay, concealing an extraordinary double world of soviet drudgery juxtaposed with sex and beauty. Phaidon Press is pleased to announce the publication of YESTERDAY'S SANDWICH (Hardcover, April 2007, $59.95), a unique collection of Boris Mikhailov's Superimposition series, which has never before been published due to artistic restrictions imposed during the Communist era. Comprised of 52 color tableaux printed on separate unbound boards and enclosed within a specially created folder and slip case, this lush package is a unique and highly collectible object. YESTERDAY'S SANDWICH embodies Mikhailov's role as artist, documentary photographer, and social observer. In Mikhailov's superimposed world everything is layered and mixed up. A naked woman swims in a lake while brown leaves cover her sensual body; a clothesline full of undergarments stretches across overgrown railroad tracks; school children play in a desolated and flooded courtyard; a woman wearing a gasmask and a woman carrying an umbrella stand side-by-side under a sunny sky. Mikhailov explains the imagery as "a work that celebrates beauty or its absence. I started with pictures of an idyllic beauty but subsequently created images that lapse into kitsch, or evoke the tedium and the ugliness of life." There are a multiple entry points for interpretation in this fascinating series. At first, backgrounds seem to show reality, but this reality is immediately distorted by the intrusion of an unexpected object, form, or color. Superimposing images introduces a different point of view--a political commentary, a personal fantasy, or simply a formal device. A myriad of extraordinary worlds merge into one scene. For nearly thirty-five years this series existed only as slides, shown only in the form of projections as paper was expensive and difficult to find. Much later, in the late 1980s, Mikhailov, while he was in the west, made prints from the slides. With the publication of this gorgeous edition it is now possible to own the series as a whole and to experience firsthand the innovative vision of Russia's most influential living photographer. Hardcover: 128 pages Publisher: Phaidon Press (January 16, 2007) Language: English