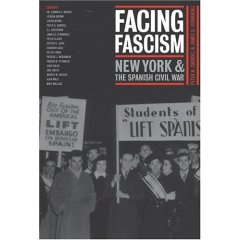 When the Spanish Civil War began in 1936, loosely affiliated groups of writers, artists, and other politically aware individuals emerged in New York City to give voice to anti-fascist sentiment by supporting the Spanish Republic. Facing Fascism: New York and the Spanish Civil War examines the participation of New Yorkers in the political struggles and armed conflict that many historians consider a critical precursor to World War II. Nearly half of the 2,800 Americans who volunteered to fight in the Abraham Lincoln Brigade against Generalissimo Francisco Franco came from the New York area. Fundraising, propaganda, and deployment for anti-fascists everywhere in America were orchestrated through New York City. At the same time, powerful voices in New York expressed sympathy for the pro-fascist side. The fighting in Spain brought to the surface the complex ideological and ethnic identities always present in New York politics. Facing Fascism examines the full range of this experience, including that of the New Yorkers who supported Franco. It addresses the role of doctors, nurses, and social workers who left New York hospitals to provide assistance to the defenders of the Spanish Republic, as well as those who remained active on the home front. The book also describes the involvement of students in the war, the key role of writers and the media, and the contributions made by members of New York's art and theater communities. Facing Fascism also serves as the catalog to an exhibition of the same name appearing at the Museum of the City of New York in the spring of 2007. The book and exhibition both make use of the Abraham Lincoln Brigade Archives' extensive holdings, which range from historical documents to video recordings of oral histories. Numerous other libraries, archives, museums, and private collectors have also been consulted to make this the most complete exhibition of its kind ever mounted. The exhibition will also appear in Spain. About the Author Peter N. Carroll is Chair of the Board of Governors of the Abraham Lincoln Brigade Archives. He is the author or editor of fifteen books, including The Odyssey of the Abraham Lincoln Brigade: Americans in the Spanish Civil War (Stanford, 1994) and The Good Fight Continues: World War II Letters from the Abraham Lincoln Brigade (NYU Press, 2006), co-edited with Michael Nash and Melvin Small. James D. Fernandez is Director of the King Juan Carlos I of Spain Center and Chair of the Department of Spanish at New York University. He is the author of Apology to Apostrophe: Autobiography and the Rhetoric of Self-Representation in Spain (Duke, 1992). Paperback: 228 pages Publisher: New York University Press (March 1, 2007) Language: English