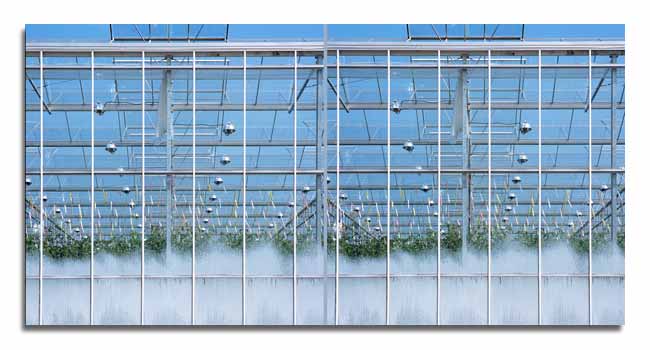 Galerie Graff is presenting Denis Farley's most recent series entitled, “Greenhouse Effects”. February 1st to March 10th, Opening February 1st at 17:00h. For this exhibit, Montreal artist Denis Farley created large scale works that address fundamental issues related to the individual and their environment. As with the series “Displacements”, he is suggesting a passage between the inner self and the memory of nature. His work often operates by juxtaposing details of natural elements and symbolically charged architectural settings. As an example, one eighteen feet triptych of the World Financial Centre in New York brings to the viewer a strange sense of hopelessness in front of the artificial micro climate atrium. For this occasion, Farley has also produced two very large stereo images of greenhouses that he photographed in the Netherlands. “Greenhouse Effects” is a new body of work that reintroduces the historical technique of stereo imagery. It is merely a pretext in order to suggest the possible extrapolation from the single unit to the infinite number of units. As we continue to evolve forward into highly controlled spaces. Farley invites us to see beyond the surface of the image and to project oneself into the vanishing perspective of the selected sites