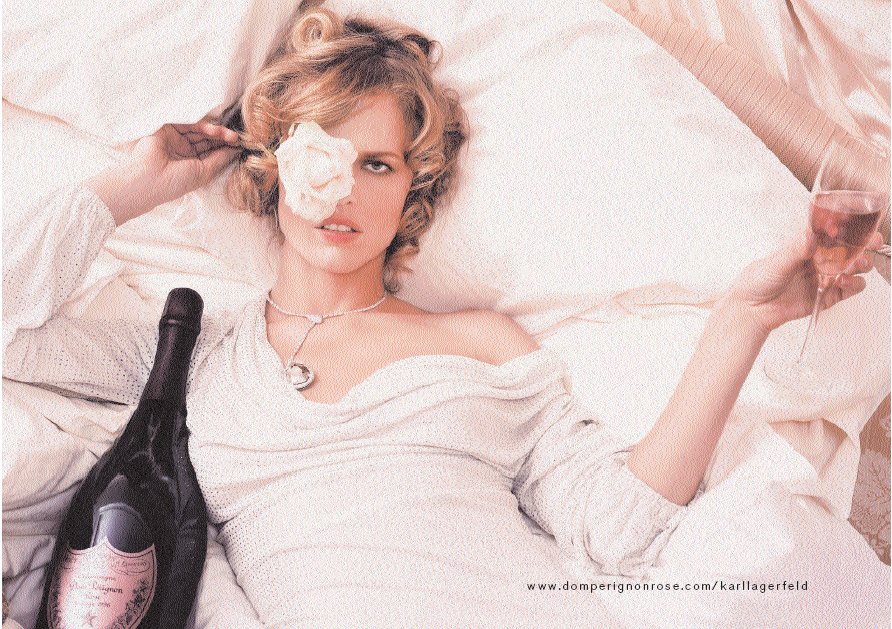 Paris, Spring 2006, a modern-day fairy tale… “I see this as pure fun, somewhat politically incorrect, but full of euphoria and laughter. That's luxury, too, when it's accepted without any complexes.” Karl Lagerfeld Right from the beginning, Karl Lagerfeld conceived Room Service as a multi-track matrix: a series of photos, a short film and an unusual version of the song “Diamonds Are a Girl's Best Friend,“ all collected in the same book. It all started when Lagerfeld was commissioned to create a campaign for Dom Pérignon Rosé Vintage 1996. He conceived an elegant exercise in style with a story line in the form of an ultra-contemporary fairy tale recounting the irresistible attraction of two strangers: a man and a woman, two solitary, seductive hedonists in a world of luxury whose paths cross at one of Paris's finest hotels. The woman is Eva Herzigova, and the man Brad Kroenig. “There's a sort of equality between them that allows for all sorts of freedom,” says Lagerfeld. “Basically, this story tells how Dom Pérignon Rosé facilitates this kind of encounter.” Johan Renck's film was shot at almost the same time, in the same hotel, the George V, and with the same models/actors, Eva Herzigova and Brad Kroenig. Says Lagerfeld: “Johan Renck is a music video genius. He liked the story and put it into action. He followed the script even more carefully than I could have done with still photos.” Relié: 60 pages Editeur : Steidl Publishing (13 janvier 2007) Langue : Français