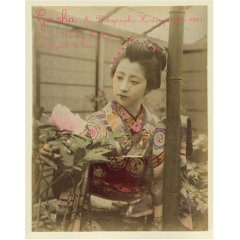 From Publishers Weekly Hand-tinted images of geishas, courtesans and other 19th-century Japanese entertainers illustrate not only their history and culture, but also the development of commercial photography in this intriguing compilation assembled by [father-and-daughter] curators and collectors Stanley and Elizabeth Burns. Made by Japanese photographers for tourists who flooded the country after it opened to foreigners, these slightly faded images show geishas performing grooming, bathing and mealtime rituals on studio sets that conjure the luxurious interiors of feudal Japan. Printed in sepia tones and delicately washed in pastel colors, some were made by artists, who labored for hours on a single frame. An essay on the social history of the geisha analyzes the nuances of the clothing, postures and settings of these women, who were recognized in their own culture as artists, quite distinct from the prostitutes and courtesans sometimes accompanying the geishas' clients. Three essays and captions detailing Japanese history represent the key to understanding the symbolism in every image. But even as the authors seek to demystify the geisha and Japanese culture, the serene, tender and sometimes cryptic masks of the geishas retain an inexplicable allure. (Jan.) Copyright © Reed Business Information, a division of Reed Elsevier Inc. All rights reserved. Book Description Japanese geisha and courtesans intrigue and fascinate Westerners. During the mid-nineteenth century, Japan opened its doors to the world and became an essential destination for travelers. Tourists desired images of landscapes and traditional Japanese culture, which Japanese photographers provided. They created souvenir albums consisting of hand-colored photographs individually chosen by the tourist. Many are so beautifully painted that they challenge modern sensibilities familiar with color photography. The photographic conventions were inspired by the aesthetics of the noted colored woodblock print medium of ukiyo-e and the privately published surimono. These works depicted the "floating world"—courtesans, geisha, and entertainments—which also were intriguing subject matter for tourists. In the seventeenth century, the social category of entertainer, or more exactly hostess and companion for men, was established—the geisha, Japanese for "artist." Geisha are professional hostesses who train in the art of pleasing men, by performing traditional dance, playing instruments and singing, and intelligent conversation and humor. They were experts in tea ceremony and all aspects of dining. Their aim was to simulate the ambience and impression of Feudal Japan. It took years for an apprentice geisha (maiko) to learn the art, but the result was wealth, renown, and celebrity. This book, Geisha: A Photographic History, 1880–1910, documents the intimate life and culture of the nineteenth-century geisha. It portrays these artists in a cultural reality created by staged studio photography, private scenes, and rare outdoor images. The geisha is pictured performing her daily rituals and various arts—bathing, dressing, hair styling, dining, dancing, and playing instruments. Images of courtesans and other working women are presented alongside the geisha to show all sides of this enchanting aspect of Japanese culture. Completing the story are insightful essays on the history of nineteenth-century Japanese photography, the social history of the geisha, and the history of the opening of Japan. Relié: 80 pages Editeur : powerHouse Books (décembre 2006)