Vanished Kingdoms: A Woman Explorer in Tibet, China, and Mongolia 1921-1925 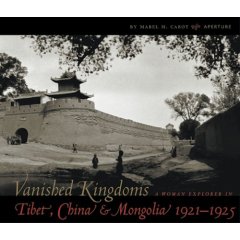 de Mabel H. Cabot, Janet Wulsin (Photographies), Frederick Wulsin (Photographies) From Publishers Weekly Part photographic catalogue and part historical travelogue, this book presents the life of Janet Elliott Wulsin (1894-1963), who went where very few women of her society had ever gone before. In 1923, she and her husband, Frederick, set out, under the auspices of the National Geographic Society, to explore China, Mongolia and Tibet with 28 camels, six horses, four Mongolian camel drivers and 10 Chinese specimen collectors. Together, they collected 1,400 botanical and zoological specimens and documented Buddhist rituals. Cabot, director of the Peabody Museum of Archaeology of Ethnology at Harvard, showcases 144 illustrations (34 in color) and provides a wealth of details, down to the provisions the Wulsins carried on their travel through the Chinese desert: marmalade from Fortnum and Mason, syrup, hardtack, dehydrated vegetables, malted milk, and even canned baked beans. She uses letters from Janet and Frederick to supplement her storytelling; one from Janet to her mother-in-law notes, I feel as if we might be going to Mars-with just as much probability of return. While the subtitle implies no men were involved, Wulsin's travels are compellingly reconstructed from her perspective. Copyright 2003 Reed Business Information, Inc. In the early 1920s, the last great age of world explorers, a remarkable young woman, Janet Elliott Wulsin, set out with her husband, Frederick Wulsin, for the far reaches of China, Tibet, and Outer Mongolia to study the people, flora and fauna of the region. Wulsin's strenuous, eventful exploration is detailed by a text enriched with excerpts from her candid personal letters. The journey proved to be a test of the Wulsins' endurance and of their relationship. While in Asia, the Wulsins took many extraordinary photographs, which form the heart of this richly-produced publication. They documented tribespeople and sublime desert landscapes, and, most remarkably, were allowed to photograph the interior of several of the great Tibetan Buddhist lamaseries, including Choni, Kumbum, and Labrang. Several dozen rare, hand-painted lantern slides survived and are reproduced here in splendid color. The photographs from the Wulsin Expedition, now in the collection of the Peabody Museum of Archaeology and Ethnology, Harvard Unversity, in collaboration with whom this volume is being produced, are a testament to the great spirit and success of a remarkable woman explorer. [the] pictures are thrilling and romantic: Janet in various native costumes, the insides of temples never before photographed . . . (sun-glasses, boots, rustic camps, also make this a costume designer's fantasy of a book). --Los Angeles Times Janet Wulsin covered thousands of miles in remote China on foot, mule, camel and raft, developing and cataloguing astonishingly beautiful, otherwordly photographs . . . Wulsin's diaries and letters are as illustrative and vivid as the photos themselves. --Washington Post Edited and Essay by Mabel H. Cabot. Preface by Rubie Watson. Hardcover, 11.25 x 9.75 in./192 pgs / 139 color. Relié: 192 pages Editeur : Aperture (13 janvier 2007) Langue : Français