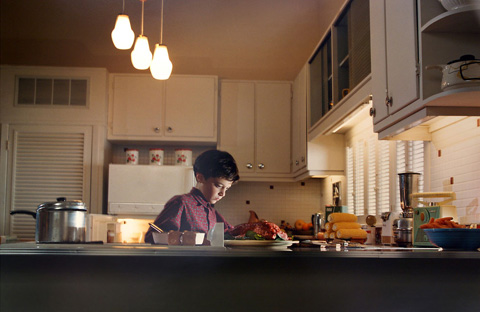 Opening hours: Tues-Fri 11am - 2pm and 3pm - 6pm Sat 11am - 2pm and by appointment Monika Sprüth Philomene Magers are pleased to present early works from the Family and Friends series by Philip-Lorca diCorcia. The New York artist Philip-Lorca diCorcia takes photographs that operate between the documentary tradition and the staged superficial images of film and advertising. In the late 1970s diCorcia began his series Family and Friends, taking photographs of friends and family members in deliberately staged settings and poses. He shows these people in seemingly banal everyday situations that on one level make the photos look like snapshots. Scenes like these are familiar, and yet it is hard to turn away from the pictures. The staging is so accomplished and finely planned, right down to the last detail, that it compels us to linger, and to consider the emotional and psychological meaning behind what seems to be just everyday. Typically for diCorcia's work, a combination of natural and strategically employed artificial light lends the photos a remarkable sense of theatre. The light seems to lift the subject of the photo to a plane beyond the everyday situation. As it explores the surface of what is presented, it turns the scene into a stage, resembling a film still that the viewer can only really understand in terms of the whole plot - only there is no such plot. The protagonists of these pictures seem caught in a freeze-frame, and the world around them has come to a standstill. A familiar situation suddenly appears unreal, because the artist has somehow stopped time and revealed the actual complexity of the scene. We cannot help sensing that something special is happening here, but what that might be remains obscure. This forces us to develop narrative strategies that examine the limits of the frozen scenes and attempt to come up with some kind of storyline. The way the scenes are staged makes the action all the more direct and therefore also confronts us with their banality, and with the private nature of the moment captured - and ultimately with the ever-recurring moments of our own everyday lives. Philip-Lorca diCorcia successfully stages the surface to guide our attention to what lies beneath it, and we end up wondering about ourselves. Born in 1951 in Hartford, Connecticut, diCorcia graduated from the Boston School of the Museum of Fine Arts. He received his Master of Fine Arts in photography at Yale University. From the late 1970s he has had numerous solo and group shows, including at the Museum of Modern Art, New York, the Photographer's Gallery, London, and most recently the Carnegie Museum of Art, Pittsburgh, and the Art Institute, Chicago. His works are included in many international collections.