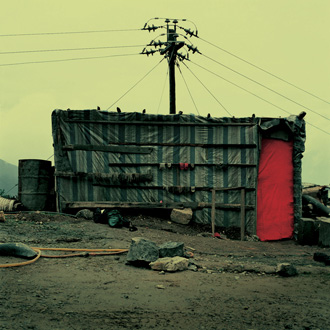 Opening: December 1st, 2006 6:30 p.m. Gallery hours: daily from 10am - 13 and from 16.30 to 19.30 pm; on Sunday morning hours apply; on Monday only evening hours will be observed. We are pleased to announce that on the 1st of December 2006 at 18:30 at Palermo's Galleria dell'Arco, via Siracusa 9 will open Xiong Wen Yun's personal exhibition entitled Cai Hong ('Rainbow'). The Chinese artist, amongst the most celebrated and esteemed working on an international stage, will be presenting her work for the first time in Italy. For this her first showing, Xiong Wen Yun will exhibit at the Galleria dell'Arco a selection of photographic images. The artist will also install a site-specific project in the city. The exhibition, curated by Paola Nicita, consists of approximately twenty large-format pictures that document and at the same time belong in a project that Xiong Wen Yun designed and realized in China between 1998 and 2001. The project 'Rainbow-Cai Hong' is organized as an articulated ensemble of outdoor performances, environmental installations, and production of photographs. The photographs that will be exhibited in Palermo are both an element of her larger project and a direct vehicle of the artistic values expressed by the artist. 'Marking' several lorries with gigantic cloths painted in the seven colours of the rainbow, the artist leads a long and colorful caravan along the desolate and impassable route that connects Bejing with the Tibetan Plateau, passing through town and cities inhabited by and peoples for whom art and color remain alien concepts. Thus, the artist has created metaphorically a living rainbow with the dual intent of sharing and, at the same time, investigating the revelatory and magical power of colour. Embodied here in the most harmonious and perfect naturally-occurred structure of the rainbow, colour succedes, almost imperceptibly, in transforming perceptions of nature and landscape as it reveals a transcendental content and explores the mysterious and intimate relationship between art and nature. For Xiong Wen Yun, art is a shared legacy that thrives when lavished on the people, those same people who ultimately allow art to live. Thus, the idea of the artistic experience as a moment of sharing together with the use of codes of Land Art conceived of as a collective performance constitute the historico-critical coordinates against which we must read a work which presents itself as a bridge (the very structure of the rainbow). In presenting itself thusly, the work of art seeks to act as a bridge between the universalistic aspirations of an "art of the people and amongst the people," and a profound and lyrical reassessment of the value of colour and the rainbow in Chinese culture, and, in particular, in the Buddhist interpretation of Tibetan tradition (for the Tibetan monks, the rainbow symbolises the ladder that unites the earthly sphere with the celestial). As curator Nicita writes, "Xiong's is a simultaneously political and emotional performance that is able to combine different aspects in one perfect gesture. In this manner, her artistic action succeeds in acting in a well-constructed context: it becomes performance in the moment in which Xiong successfully persuades the lorry drivers who transport goods along the border between China and Tibet to cover their cargo with large coloured cloths and again when the homes on the border are draped with cloths coloured by the artist. And her work is certainly a metaphor of a new politics that seeks to oppose institutional hierarchies by means of a poetic sublime according to which the pursuit of the sign coincides perfectly with the very essence of colour. The pictures which will be shown in Palermo were previously part of an important collective exhibit entitled "Between Past and Future: New Photography and Video from China", an exhibit which introduced a selection of the most important video and photographic Chinese artists to an American and in European audience. The various galleries which were home to this exhibit include the Victoria and Albert Museum in London, the Haus der Kulturen der Welt in Berlin, the Seattle Art Museum, the Museum of Modern Art and at the David and Alfred Smart Museum both in Chicago, and the International Center of Photography in New York City. Recently, the CCTV, the first Chinese State Television, dedicated and entire special to the 'Rainbow-Cai Hong' project. A catalogue will be published presently and will include the curator's written commentary as well as a selection of images pertinent to the both the exhibit and the site-specific installation for Palermo.