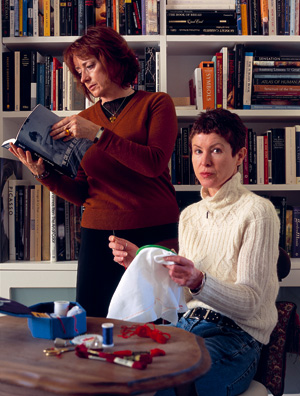 Abigail O'Brien (*1957) studied painting from 1992 to 1998. She lives and works in Dublin. Having shown Kitchen Pieces - Confession and Communion (1998) and Extreme Unction - From the Ophelia Room (2003), Galerie Bugdahn und Kaimer now follows with Confirmation - Martha's Cloth, our third showing of an individual group of works from the larger six-part cycle, The Seven Sacraments (1995-2004). This was first exhibited in its entirety in Germany (Haus der Kunst, Munich, and the Kunsthalle at Lingen) in 2004 and Ireland (R. H. A. Gallagher Gallery, Dublin) in 2005. The overall installation consists of eleven photographic works on Cibachrome mounted on aluminium under acrylic glass, each measuring 120 x 96 cm / 48" x 38"; the embroidered object, Comforter (a hand-sewn 200 x 130 cm / 80" x 52" linen blanket, embroidered with a text in cross-stitching) and the sound piece, Creed. The colony of photographic pieces is made up of an eight-part group of pictures taken in cool blue tones at a linen factory, and a triptych that paraphrases the structure of altarpieces, variations in contrasting, saturated colours, on the biblical Mary-and-Martha theme. On the side panels of the triptych, The Sewing Lesson I and II, two women in mute consensus are preoccupied with a piece of embroidery. The background there, a section of shelving with literary tomes, cookery books, theoretical and picture books on art in a highly allusive arrangement, becomes in the static, vacuum-like central panel entitled Still-Life with Needle and Thread the main protagonist. The embroidery tools deposited on the shelf evoke the contrast between the simplicity and privacy of a traditionally feminine cultural technique and medium on the one hand and the official cultural code of 'High Art' on the other. The alloying of the women with the seclusion of such interiors also keys into a reference to seventeenth-century Dutch genre painting. The whole is underscored with the biblical subtext on the meeting of Christ, Mary and Martha, another recurrent iconographical subject. O'Brien has reversed or at least, blurred the roles traditionally assigned to these women. While Martha, engaged in a practical activity, usually stands, and Mary sits, the reverse applies in O'Brien's version. The male figure, the focus and the judgmental figure are absent, the asymmetrical hierarchy of the two women thus ceding to a symmetrical coexistence. A contrast in both atmosphere and inner meaning is generated between the eight Cibachromes with their much enlarged details from the linen factory, in which industrial textile production is juxtaposed to individual handicraft. The ensemble of tautly stretched, fine lines in a lucid composition, in invoking an imaginary staccato rhythm of mechanical components, creates a virtual space of acoustics. But just as the titles of the pieces name various embroidery and sewing stitches, none of which are to be seen here, the process of weaving becomes tangible - but not its end product, the length of Martha's Cloth. Nor does the sacrament of Confirmation make an appearance as such. Instead, the artist works with a shifting choreography in which the steps undermine the major theme, touch it tangentially or run athwart it in deconstructive mien. Finally, Comforter (as in the Holy Spirit) unites the subject matter of the two divergent photograph panels in a synthesis. The lettering of pale blue cross-stitching aligns details out of different women's lives like a subjective écriture automatique and enumerates the variants of the feminine role (mother, sister, daughter, girlfriend, etc.). In charged contrast, Creed can be heard: a woman's voice intoning a monotonous repertory of dictums, the collective psalms of workaday life, with their questionable claim to wisdom, permeated with the patterns of prayer ('I believe...'). In O'Brien's perspective human life with its interwoven profane and sacred rituals is lent a visual allegory through a piece of cloth and its pattern of warp and woof. We pick up the 'thread' from the moment we take leave of youth. Thus the sacrament of confirmation enters the work indirectly. As a moment of reinforcing faith and baptism, it is at once a kind of initiation to the personal assumption of responsibility that marks adult life. In particular, O'Brien's contemplation is of the conceptions of life in a female identity, as voiced in the title of Martha's Cloth. In the reciprocal references and complementing in operation between the individual elements of this installation, she succeeds in complex fashion in critically questioning the function and meaning of the Christian sacraments. Simultaneously she primes our sensitivity for all the concurrently existing, seemingly negligible rituals of everyday life. Gabriele Wurzel