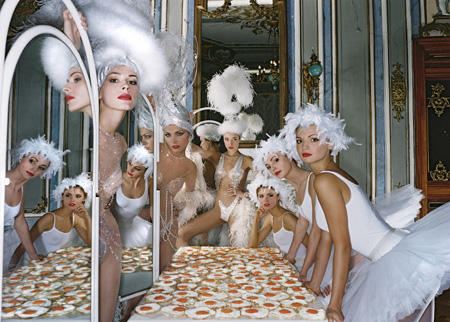 Paris Photo November 16-19, 2006 Booth: A3 Galerie f5,6 proudly presents new and unpublished work by the East German artist Olaf Martens (born 1963 in Halle, Germany). His work will also be shown at Paris Photo 2006. Olaf Martens is interested in staging his pictures like a theatre play. In his often humorously constructed images, Martens combines a take on fashion, documentary, conceptual, social, even animal photography, art historical and socio-political references. His work cannot be categorised but is a combination of what can be termed a kind of post - modern eclecticism. Marten's view of the feminine takes on a very particular, interesting turn in his work and is the central theme around which all else revolves. Martens undermines the seemingly homogenous facade of the photographic. His works is characterised by uniting contrary details, and refiguring them in a very unique and hybrid manner. This leaves many questions to the viewer, not apparent on first glance. The theme of the outside and the outsider has been a recurring theme in Marten's work from the very beginning. His images are most often taken in dis-used factories, the outskirts of cities, and in new and up-coming cities like Russia, Czechoslovakia, Turkey and East Germany. Similar to David Lynch's imagery, Martens uses recurring roles and types usually those of outsiders to society. Cleaning women, dwarfs, seamstresses, overly fat women, strippers, dancers, transvestites are of particular fascination to him. They inhabit the opposite end of the spectrum and Martens ironically combines them with seemingly flawless models. Yet, here the model appears in latex, gas masks, workers' outfits and high heels, adding another hybrid layer to his work. Olaf Martens studied photography at the highly renowned Leipzig Academy for "Graphik und Buchkunst". His contemporaries are the well-known "Leipzig School" with artists such as Neo Rauch, Tim Eitel or Tilo Baumgärtel. His work has been exhibited in many museum group exhibitions on contemporary German photography as well as in solo exhibitions at the Kunst Museum, Bonn, Grassi Museum, Leipzig, Moscow House of photography, Leopold Museum, Vienna, German Historical Museum in Berlin, Deichtorhallen, Hamburg. He has exhibited in galleries nationally and internationally. His work is included in collections such as the FC Gundlach Collection and the Sammlung Goetz, Munich.