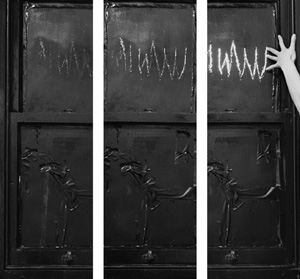 The exhibition is part of the international conference 'Sacred Space' supported by British Academy Chaplaincy to the Arts and Recreation Literature and Theology Scottish Arts Council University of Stirling 'Biermann's photographic essays access the metaphysical in a distinctly contemporary context, not only do they summon the uncanny but also offer a unique and singular approach to the photographic image. His staged photographs are restricted to monochrome, reminiscent of those pristine, purist art photography images of the 1950's and 60's. He uses a panoramic camera to create a vertical, portrait format, his images present a disconcerting counterpoint of hard-blown industrial edges and surfaces with the vulnerability of nude, cling-film or fabric-wrapped bodies. Like the paintings of Francis Bacon, Biermann's diptychs and polyptychs suggest narrative sequences but paradoxically resist narrative interpretation.' In: Roy Exley, Apparitions and Apparencies: Photography as Metaphysics. The Work of G. Roland Biermann, London 2005 APPARITIONS - THE TRIPTYCHS catalogue a limited edition hardback version of the catalogue will be available from October 2006 at selected art and photography bookshops. ISBN 0 954 9869 1 1