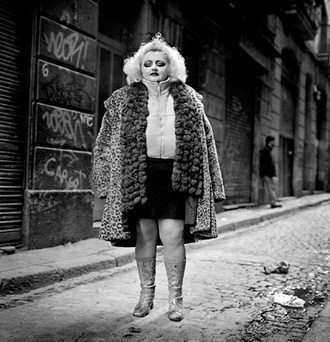 Aitor Lara (Baracaldo, Vizcaya, 1974) won the first prize in the contest organised by the Juana de Aizpuru gallery in 1999 and began an artistic career that has situated him as one of the up and coming talents of his generation in documental photography. Since then he has participated several editions of ARCO and PARISPHOTO. He has had a solo show in the Juana de Aizpuru gallery in Sevilla (June 2000), and he has work in the photographic collection of the Madrid Regional Government (CAM). In 2004 Lara was awarded the Clavijo grant of the Casa Asia to produce a project on the journeys of Ruy de Clavijo in Samarkanda. Lara publishes his work regularly in the bulletin the Spanish Geographic Society. Currently living in Sevilla, during 2006 his photographs have been published (together with the work of Luis Asín, Atín Aya, Javier Campano and Carlos Pérz Siquer) in the book A Graphic History of the Bullring of Sevilla and he is currently working on a monographic book edited by the Real Maestranza de Caballería de Sevilla, which will be published in 2008. pazYcomedias gallery of Valencia presents Aitor Lara's first show in the city. The exhibition titled "Dragoman" consists of 18 black and white photographs produced with film cameras and developed with conventional chemical processes. Lara has an immense body of work, fruit of his projects in the streets of Sevilla, Madrid and Barcelona, and of his projects in countries on the peripheries of the western world (Mexico, Uzbekistan, Senegal and Morocco) to carry out his photographic / documental studies and research of the characteristics of each socio-cultural context. Through the lineal development of these specific works Lara has developed a very personal approach to photography which goes beyond the purely documental, and situates his work in the artistic field in the widest sense. Offering a transversal perspective of his work, putting in a second plane each context, allows a focusing on his personal and incisive way of working with the subjects of his portraits and offers non-lineal readings of his work: spatial and temporal leaps that convert the mix of contexts into the universal scene of "human drama". The selection of images from different times and places in the world offers a coherent show of his art that runs a line between an exacerbated realism and an expressionist poem of the human condition, in which the photographer/author disappears, opening up a space between the scene and the viewer. This disappearance of the presence of the author before his subjects is what creates a mysterious relation between the curious, voyeuristic gaze of the spectator, and the deep and naked gaze of the subjects that exhibit, with a rare sincerity, their personal psychological condition that is impregnated with the socio-cultural characteristics of each environment. Aitor Lara has described this subtle process in the following way: "By photographing we open up a channel of communication and we establish new links to reality. It is as much a method of gaining knowledge as a way of being in the world, because the peculiarity of photography is not only found in the image produced but also in the relations created"