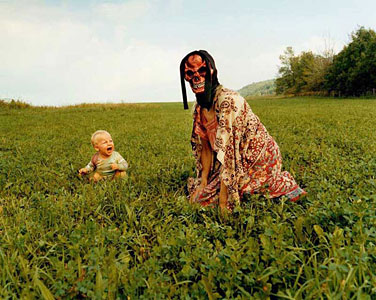 Artist's Reception Thursday, October 19, 2006, 6:00–8:00 pm Yossi Milo Gallery is pleased to announce an exhibition of color photographs by Tierney Gearon. Entitled The Mother Project, the exhibition will open on October 19, and close on November 25, with a reception for the artist on Thursday, October 19, from 6:00 to 8:00 pm. This will be the artist's first exhibition at the gallery. Tierney Gearon's most recent work, The Mother Project, is the culmination of a series spanning more than eight years. The artist continues to photograph her family, but now concentrates on her mother, who lives alone in a small town in upstate New York. The exhibition will include twenty-five 20” x 24” photographs set mainly in and around her mother's home. The images depict psychologically intense, often bizarre scenarios, some of which occur naturally and some of which are facilitated or encouraged by the artist. Many images include Gearon herself or one or more of the artist's children. The subject of The Mother Project is the interaction between the artist, her mother and her own children. The photographs are personal studies of her family, yet raise larger issues of aging, mental illness, and the complicated dynamic of the mother-child relationship. Tierney Gearon was recently the subject of a full-length documentary film entitled Tierney Gearon: The Mother Project. Produced by Jack Youngelson and Peter Sutherland, the documentary premiered at the 2006 Tribeca Film Festival, will be screened at the upcoming Vancouver International Film Festival and CINEMA Rome Film Festival, and will air on Sundance Channel in 2007. In November, Steidldangin will publish a book of over 70 images from the project entitled Daddy, where are you?. Ms. Gearon's work has been exhibited at Saatchi Gallery, London, in 2001. She was born in Atlanta in 1963 and currently lives and works in Los Angeles.