The Contemporary German Photography at the Thomas Erben Gallery 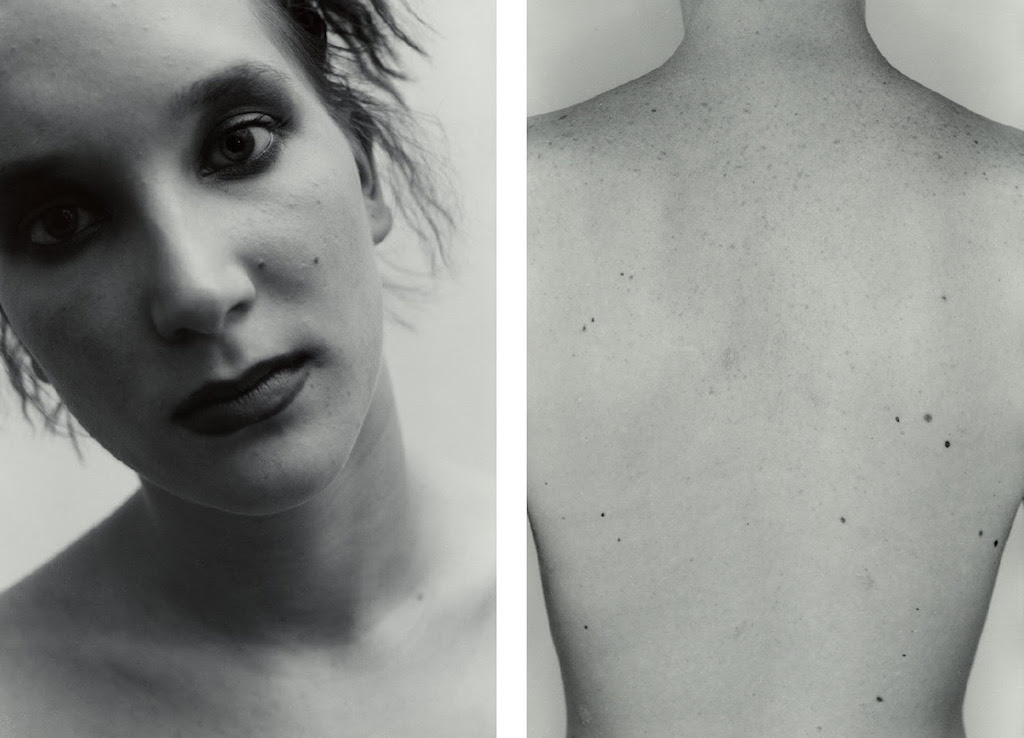 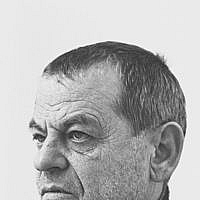 Thomas Erben Gallery is pleased to present Photography Out of Germany, a group exhibition of photographers who engage and expand the practice of contemporary German photography. The exhibition considers how photographic production in Germany has evolved, expanding past its identifications with the Becher school, Minimalism, and Conceptual Art. While photographers continue to employ these aesthetics and formal tropes – seriality and the index, for example – the turn towards performance, humor, process, and an integration of multiple media is producing invigorating works that challenge the conventional associations of “German Photography.” The exhibition explores some of the recent practitioners whose work has grown out of this dynamic, historically-rich context.

(Cover photo)
In 1976, Michael Schmidt established the Werkstatt für Photographie at VHS Berlin-Kreuzberg as an international center for photography in West Berlin. Schmidt is known for his meticulously composed series of black and white photographs, such as Stadtbilder and Frauen. In two images of Stadtbilder from the 1970s, he depicts vacant sights from Berlin’s streets. Taking up the divided city as his subject, the artist avoids over-determined symbolism in favor of deserted sites that he richly imbues with a social focus. In Frauen, he pairs portraits of women with secondary, indirect images in which his camera lingers on clothing, texture, and tone. In both the Stadtbilder and Frauen, Schmidt depicts these contemporary social subjects in a way that does not assert a final reading, leaving them open for different viewers’ interpretations. 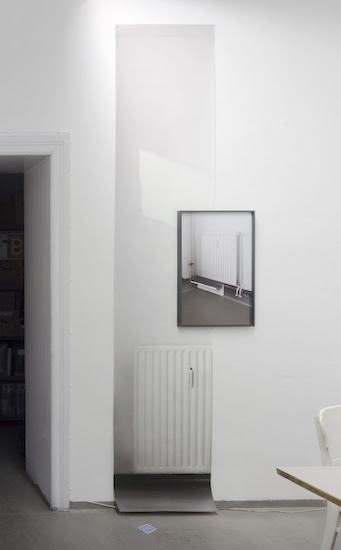 Kathrin Sonntag’s works similarly respond to the site of their production, but within the literal space. In the work, END OF QUOTE, Sonntag plays with the viewer’s perception, toying with the distinctions between actual, perceived, and photographic space. Sonntag positions a framed photograph of a wallpaper, taken during the deinstallation of a previous show, over the same wallpaper fragment. Objects, such as a playing card, appear within the images as well as within the gallery, linking the different levels of representation that run through the artwork. Rather than serving to efficiently document, photography becomes a force of friction – an ironic medium that generates humor as readily as meaning. 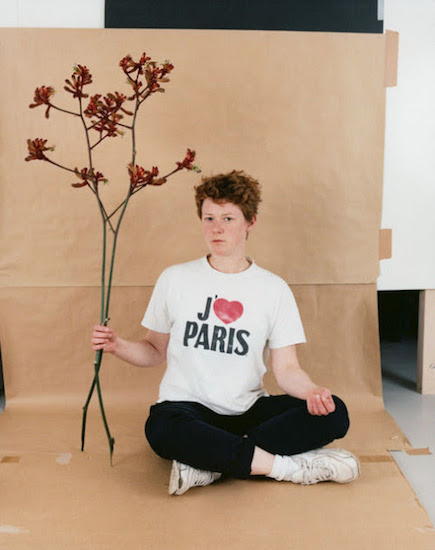 A playful acknowledgment of the space of production is a feature in the work of Annette Kelm, as well. In the three-part work J’aime Paris, a seated figure holds two branches in front of a makeshift seamless. The studio in which it was shot is not hidden in the final image, and the viewer can clearly see how the creased brown paper is taped to the wall behind it. Rather than revealing a conceptual structure, the seriality provides only minor differences – in facial expressions, in the pose of a hand. Kelm’s reduced aesthetic privileges texture, surface, and color, all of which is evident in the work Denim, Pineapple, LOL!, XO, UR MY BFF, HOW R U? Here, a plant springs out of bunched denim, its natural form contrasted against a printed fabric featuring short text messages. The works are beautifully shot with a soft color palette, but are not gentle: through her scattered symbols, Kelm resists the promises and easy understanding of the conventions of photographic production. 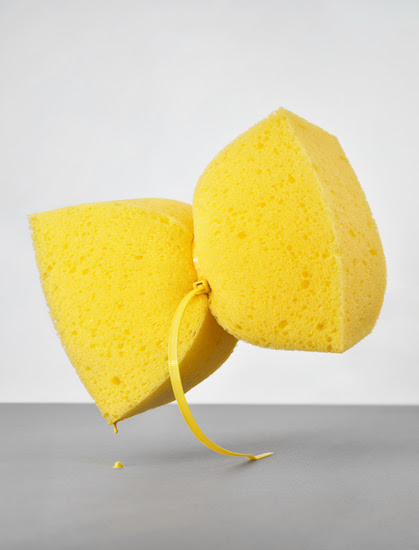 Alwin Lay’s work uses elaborately staged events as the basis for hard-to-believe images. In one photograph, water pours seemingly-backwards out of a straw, accumulating on a brown table. The playful process is nonsensical, but Lay’s attention to texture, and to the visual effect, is captivating. In the video, Balloon, Lay devises a Rube Goldberg machine in which it appears that a burning sparkler will pop a balloon, causing water to pour from the suspended bottle. However, the series terminates with no such event. The logic is neutered from his work, leaving only delicate colors, shading, and formal clarity. Lay’s attention to precision and beauty reinforces the work’s absurdity, and the whimsical humor of these set-ups is readily understood in A Drop of Yellow, in which a yellow sponge seems impossibly supported by a zip-tie that binds its center. 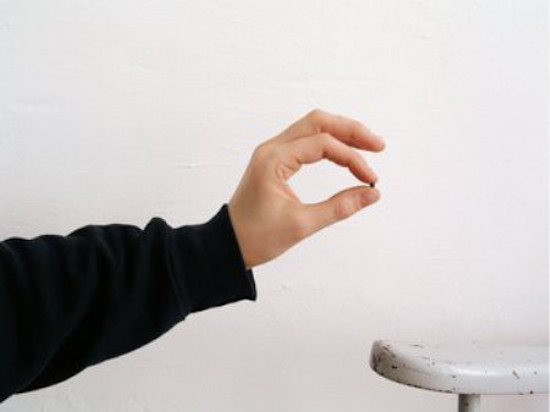 Serial structure is also at the center of Points in a Room Condensing, Sofia Hultén’s collection of images in which objects are placed in one another like a Russian nesting doll. From a small ball bearing, the series progresses through objects that include pillows, clothing, and boxes until they all end in a cabinet that contains them all. The stark white bureau is pinned at the center by a small, black keyhole – the point of a lock that would reverse the entire progression. In The Actual Calculated Size of a Black Hole, Hultén has photographed a page from a popular science book showing the size of a black hole, as if it had the same mass as the earth. The size of the hole is drilled through the glass frame, the photograph, and the wall behind where the photograph hangs. These works play with the deterministic logic of the series, parodying Conceptual Art’s obsession with structure. Ultimately, Hultén’s works question and reverse seriality, derailing its progression to assert that “everything is in flux and that change is always possible.” 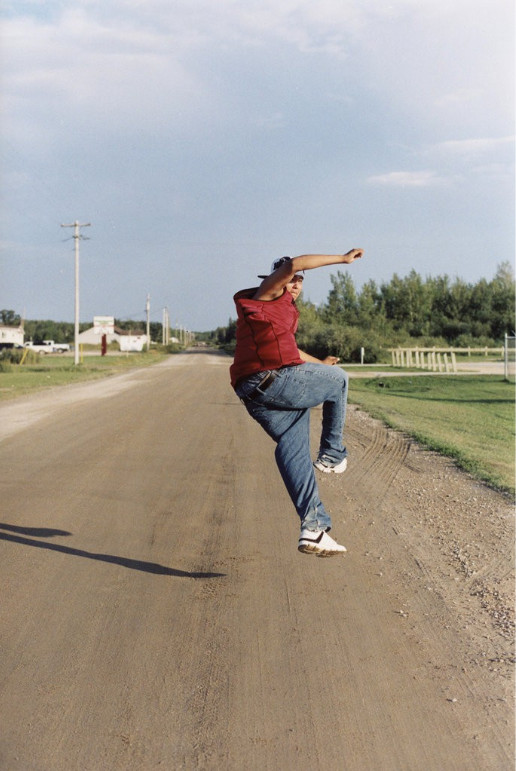 Unlike the other exhibited artists, Tobias Zielony produces images that narrate from a specific social perspective. For the series Manitoba, German-born Zielony traveled to Manitoba, Canada to document the cultural geography of a landscape that is neither an urban center, nor a desirable periphery. The moody, vibrantly colored photographs are tinged with desperation, but they resist the opportunism of social documentary. The disconnected landscape is in contrast to the self-determined subjects: the resulting images are lively depictions of the people who live in between the global arteries of trade, finance, and celebrity. 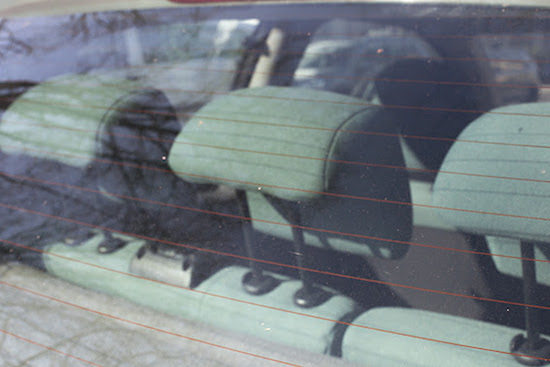 In three large photographs, Heinz Peter Knes depicts scenes whose subject matter cannot be easily localized. Marseile shows a washed-out field of white, its borders encircled with a string of advertising posters. Another work depicts a car’s headrests, captured through the automobile’s rear window. In these subjects, Knes addresses the exportation and circulation of culture. The photographs challenge the content and aesthetic normalization of a “German” photography show, with Knes questioning the logic by which nationality and artistic production become linked.