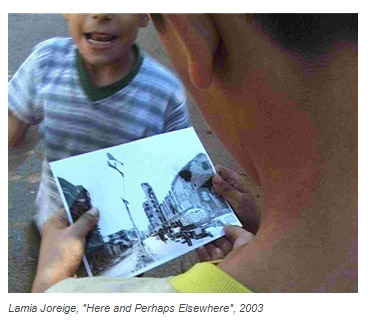 Lamia Joreige, "Here and Perhaps Elsewhere", 2003 Rumour as Media Opening: 26 Sept 2006, 6 p.m. Petra Bauer / Jochen Gerz / Lamia Joreige / Martha Rosler / Walid Sadek / The Speculative Archive / Ultralab™ Discussion Forum: “How to do things with rumour”, Wednesday, 27 September 2006. Rumour may be the world's oldest media. What is more all-pervasive, more corrosive than rumour? Like its siblings, gossip and hearsay – or what is loosely referred to as “news” – rumour is not just the channel through which the subordinate classes vent their spleens against the rich and famous, spreading compromising half-truths about them. Nor conversely, is rumour merely the way in which the powers-that-be manipulate public opinion. If rumour is so corrosively effective, it is because it is itself a media. Though rumour is characterised by its indeterminacy – its basic anonymity and lack of identifiable source or authentication protocol – rumours are performative. That is, they make things happen. As everybody knows, there is “no smoke without fire,” and once a person is stained by rumour, it is next to impossible for them to clear their name. It is for this reason that rumours have always proven so devastatingly effective in provoking panic and pogroms. Whether they spread from the outskirts to the corridors of power, or the other way around, rumours have terrified and inspired the common people no less than their rulers, sparking fear of war and reprisal, thirst for vengeance and retaliation. At the same time, rumours are always context specific. A rumour “flies” in one context though it would never leave the ground in another. This context specificity is linked to rumour's indeterminacy. In short, precisely because it is by definition unauthored, rumour is what “people are s aying”, what's “going around” or – to quote songwriter Leonard Cohen – what “everybody knows.” This is what makes rumour so impossible to suppress or control, and why in the age of the blogosphere, cell phones and media concentration, rumour has such a promising, and eminently ambiguous, future before it. This exhibition seeks to document the performative power of rumour and to examine some of the ways in which seven contemporary artists and artists collectives have made use of that media to deconstruct, manipulate or exploit its fascinating power. In highly different ways, their works focus on rumour's paradoxical capacity to build community, by instilling in its listeners an almost overwhelming urge to pass it on to someone else, drawing its participants into a collective rhetorical operation of confident uncertainty. Curated by Stephen Wright