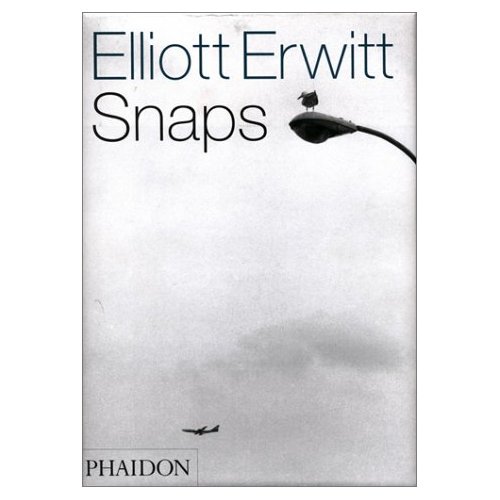 Elliott Erwitt may not be a name that rolls off the tongue, but many of the photographs featured in Snaps, Phaidon's delightful retrospective of his work, will be instantly recognisable. And those that aren't, often prove even more eye-catching. Born Elio Erwitz in 1928 to Russian parents, but raised in America, Erwitt was already a member of the elite Magnum photographic agency when he was in his 20s. The mortgage was paid with high-profile, big-budget colour assignments, but he always carried his hobby camera, a Leica, for his alternative canon, so to speak, of black-and-white, one-take wonders. These second sights make up Snaps, a consciously casual title that captures the essence of Erwitt's professional philosophy as perfectly as he captured his subjects, encapsulating the moment as well as the medium. Put simply, he could not take a bad picture, and this uncropped, unmanipulated collection, reactive rather than conceptual, encapsulates the deceptive simplicity of his sustained talent, from a time when photographers just--snapped. Most famous for portraits of cute mutts and bug-eyed Chihuahuas in his bestselling Dogdogs, in skirting the sentimental, Erwitt unashamedly embraces the affirmative, yet his compositions are sympathetic and often cheekily playful; one can identify his influence on the likes of Martin Parr, for example. For Snaps, pairs are found for most pictures, to spar or smooch, often across the years or decades, with recurrent studies of juxtaposition, advertising signage, city life, fowl carcasses, children, and something of a leg fetish. Standout images include the famous Nixon/Khrushchev confrontation, stills from the Nevada set of The Misfits, Muhammad Ali mid-fall against Joe Frazier in New York in 1971, a smouldering portrait of Che Guevara, and a brilliant groupshot of Erwitt's fellow Magnum-ites, all obscuring their faces. The sheer quality of his work is also borne out by the less grand images, where he can insinuate the quietly political from the personal, whether a gesture, gait, expression, or the naked human body. In showing another side to 20th-century photography--and Magnum--beyond war reportage, Snaps presents the ridiculous, indomitable beauty of everyday life, and a brilliant career that has celebrated it. --David Vincent --Ce texte fait référence à une édition épuisée ou non disponible de ce titre. Book Description Elliott Erwitt Snaps is a comprehensive survey of Erwitt's work containing more than 500 pictures, many never published before. From famous images like Khrushchev and Nixon arguing in Moscow in 1959 and Marilyn Monroe with the cast of The Misfits, to more personal subjects, Erwitt's distinctively witty style captures the famous and the ordinary, the strange and the mundane over a period of more than half a century. The book's nine chapters, entitled Look, Move, Play, Read, Rest, Touch, Tell, Point and Stand, act as a means of grouping and organizing - making broad connections while playing a game of pun and ambiguity in keeping with the visual games Erwitt plays with the camera. 'The hallmarks of an Erwitt classic: the ability to spot an absurd juxtaposition and to record it with childlike delight Ö This tome shows that he hasn't lost any of the visual wit that makes one relish his pictures, while, at the same time, recognizing the melancholy that infuses any realization of the arbitrariness of existence.' (Time Out) 'Rare among photographers, Erwitt can make you laugh out loud (just turn to pages 86-87), but his scope is Tolstoyan. This 550-page retrospective will absorb you for years.' (Independent) 'An essential career-spanning retrospective that reveals Erwitt's unassuming wit, brilliant framing and deep humanity.' (New York Post)