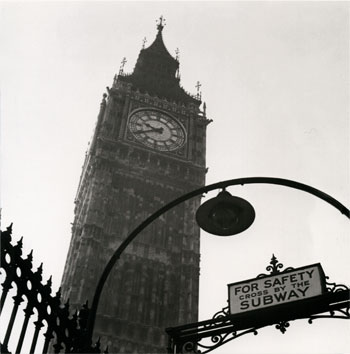 “His photographs have managed to outlast fashion – one of the rare achievements of photographic history.” Cecil Beaton In the early 20th Century, Emil Otto Hoppé produced one of the most unique photographic documents of London. Over 35 years he captured the city at a critical point in its transition from a 19th Century city into a modern metropolis. We are delighted to announce the first ever exhibition of the people and landscape of London as seen by Hoppé. Working systematically between 1910 and 1945 Hoppé chronicled the landmarks and architectural fabric that defined the city of London. His work can be compared to Eugene Atget's photographs of Paris, and Bernice Abbott's of New York both in scale and modernistic approach. His photographs record the break with academic and historical traditions in architecture, and the post World War I modernity creeping into the city in the form of graphics and motorcars. He also produced an intimate portrait of the city's diverse inhabitants – the ladies about town, stockbrokers, market traders, circus performers and soapbox orators. His inventive representations of city life and the urban character of London embody his modernism, his synthesis of documentation and lyricism have influenced many, including Cecil Beaton, who named him The Master. For further information please contact Eleanor Macnair 00 44 (0) 207 352 3649 / press@michaelhoppengallery.com