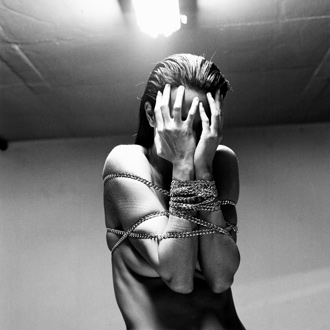 Helmut Newton "Yellow Press" Two Helmut Newton projects Yellow Press and Playboy Projections are to be exhibited by the Helmut Newton Foundation as of June 4th, 2006. " 'Yellow journalism' a phrase coined in the late 19th century because of its smear appeal, still lives on as a derogatory term for some types of publications. For years I have been cutting out photographs from the daily press and special magazines, many of Italian origin which regularly publish pictures taken by the paparazzi of events and personalities, and keeping them in my drawer. They inspired me. Later I confessed my love to what is known in French as 'les faits divers' to Roger Therond, legendary editor in chief of 'Paris Match' who commissioned me on a number of occasions to cover a 'faits divers'." Helmut Newton Helmut Newton "Playboy Projections" The groups of images that comprise "Playboy Projections" are shown in the centre of the foundation's exhibition space. As a regular contributing photographer to the world's best fashion and entertainment magazines, Newton also photographed for 'Playboy' from the 70's. Having developed a powerful, personal aesthetic that retains universal appeal, he skirted the taboos of the day, going beyond the traditional confines of centre-fold photography. Veruschka Self-Portraits In a first for the Foundation, another artist will be given a forum alongside Newton's work. Vera Lehndorff's series of directed self-portraits of her fictional character 'Veruschka' explore the boundaries of personality. After beginning her career as a model in the 60's, Lehndorff used the Veruschka pseudonym to enter the public domain, becoming one of the most sought-after and heavily publicized models in international fashion. She worked with many prominent photographers, including Newton. A decade ago, Lehndorff performed the role of cliché model in collaboration with photographer Andreas Hubertus Ilse. The photographs show different aspects of 'Veruschka' in eccentric, custom-made costumes that represent her variously as a trans-gendered male intellectual, a streetwise rapper, or a Hollywood superstar.