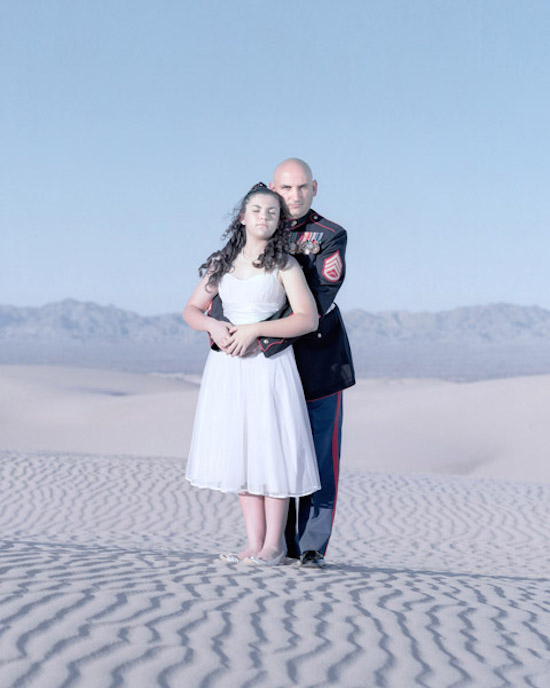 In 2011 the Swedish photographer David Magnusson began an odyssey in the United States that led him to creating a body of work so forceful in its effect that it has ignited controversy wherever it has been shown. Purity is a portrait project comprised of photographs of young girls with their fathers who have taken vows, pledging their virginity will remain intact until marriage. These pledges are spoken in front of an audience of like-minded fathers and daughters at Purity Balls in what can be considered a quintessentially “American” rite of passage. When Magnusson first learned of the Purity Balls, he “imagined angry American fathers terrified of anything that could hurt their daughters or their families’ honor” but eventually came to understand it as a means of parents protecting their children within the parameters of their faith and beliefs. He quickly became aware that his initial reaction to the concept was borne out of prejudice and a lack of understanding. That realization was all he needed to head fully into learning about the purity movement.


In order to gain access and acceptance by its audience, Magnusson participated in Purity Balls in Louisiana, Arizona and Colorado in 2011 and 2012. Magnusson’s ultimate approach to photographing the couples was to allow them to pose themselves, and what he found was that the fathers almost uniformly adopted a more passive posture whereas the daughters aggressively chose their positions, directing the course of the shoot. With a high key, pale palette used throughout the work, Magnusson achieves a deceptively concise rendering, neutralizing any suggestion of judgment, allowing viewers to formulate their own conclusions on both the culture and the ritual. In that regard, Magnusson’s work is more closely aligned to the topographic landscapes of Bernd and Hilla Becher, Joe Deal or Lewis Baltz than of the portraiture of Richard Avedon. One is reminded of Nicholas Nixon’s statement in the catalogue to New Topographics: Photographs of a Man-Altered Landscape, “The world is infinitely more interesting than any opinion I might have of it.” Criticism of the work has been aimed less at the photographs themselves than at the phenomenon they represent. Magnusson explains his interest. "Purity" is intended to make us reflect on how we are shaped by our society and how we interact with world through the values we embrace as our own. It’s an exploration of how the message and meaning of a photograph is something very personal and subjective, always changing, depending on the viewer."

David Magnusson (b. 1983) lives and works in Stockholm, Sweden. He studied at the Nordic School of Photography Biskops-Arnö with Anna Clarén, Anders Petersen, and Thomas Wågström as mentors. In addition to his projects, he works as a freelance photographer for clients such as Save the Children, TIME Magazine and Svenska Dagbladet.
David has received awards and honors from The Swedish Arts Committee, The Swedish Authors Fund, Picture of the Year International, Picture of the Year Sweden, as well as being selected for the World Press Photo Masterclass.

The monograph, Purity, was published by Max Ström in March 2014, during the exhibition at Fotografiska, The Swedish Museum of Photography, in Stockholm. Purity has received several awards and has been featured in international media such as TIME Magazine, The Guardian, Los Angeles Times, Huffington Post, Der Spiegel, Stern, La Repubblica, BBC, and The Daily Mail.