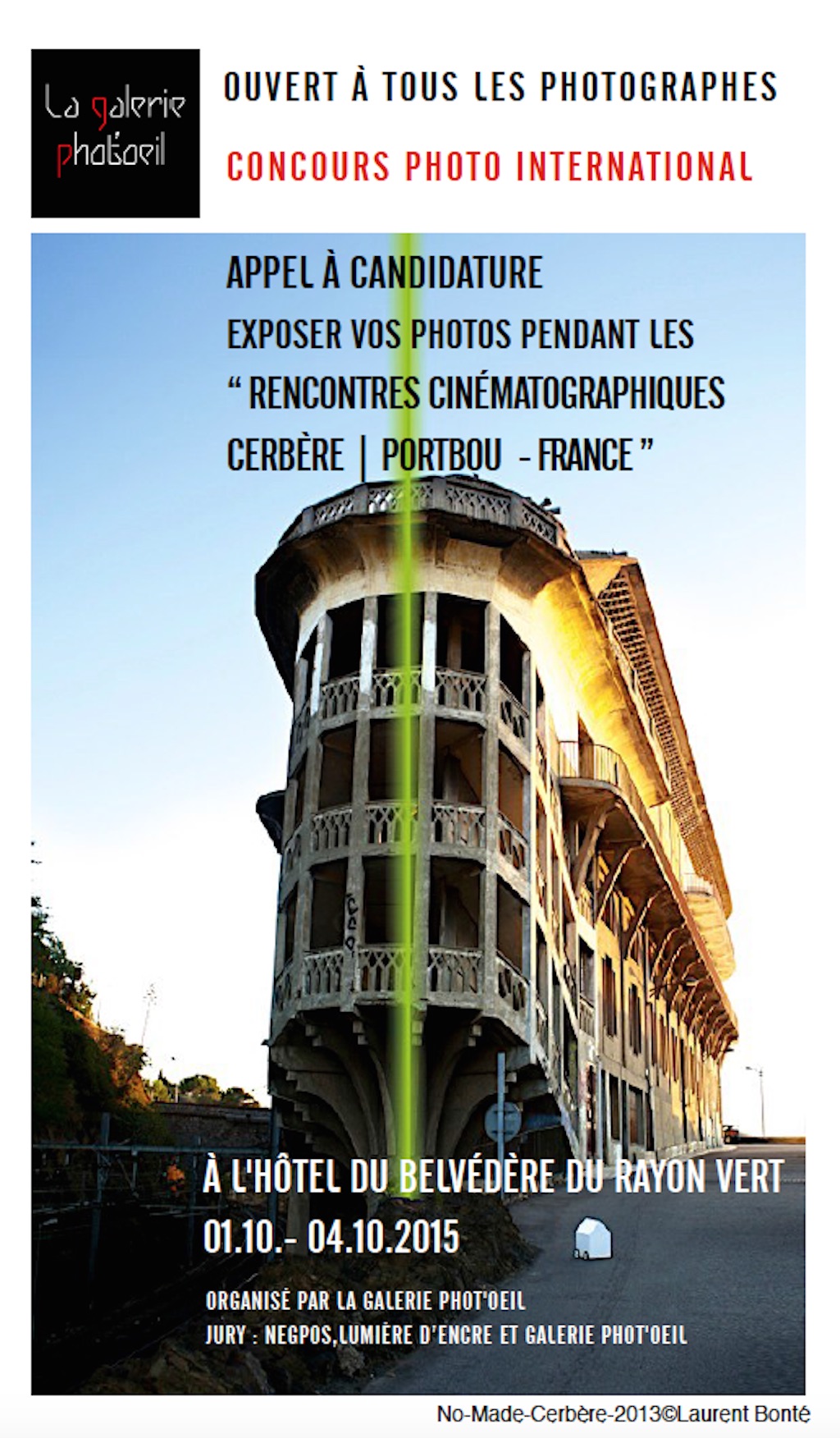 CALL FOR ENTRIES EXHIBIT YOUR PHOTOS IN CONJUCTION WITH “ RENCONTRES CINÉMATOGRAPHIQUES CERBÈRE | PORTBOU – FRANCE ” AT THE BELVEDERE HOTEL.
01.10.- 04.10.2015
ORGANIZED BY GALERIE PHOT’OEIL
JURIED BY NEGPOS, LUMIÈRE D’ENCRE AND GALERIE PHOT’OEIL

You can choose between two themes :

“ Passage ” with reference to the “ passages from Dani Karavan, homage to Walter Benjamin (Jewish German philosopher, Walter Benjamin, who commited suicide in Portbou while fleeing the nazis and the Vichy regime)” – submit a sequence with max.20 images.

“ Fiction ” the sequence request should contain a minimum of an image from the “ Belvedere Hotel ” in Cerbère (66)-France
– submit a sequence with max.20 images.


The winner will be awarded :

< an exhibition of your photographs in October as part of the “ 11ème rencontre cinématographique ” at the “ Belvedere Hotel ” in Cerbère a French village close to the Spanish border, exhibition Launch Thursday, October 1th, at 7.30 pm;

< video projection in October as part of the “ 11ème rencontres cinématographiques ” at the “ Belvedere Hotel ” in Cerbère a French village close to the Spanish border;

< for 2016, exhibition of your photographs at “ Negpos gallery ” in Nîmes, France;

< vidéo projection of your sequence at the “ Belvedere Hotel ”, exhibition Launch Thursday, October 1th, at 7.30 pm;

< for 2016, exhibition of your photographs at “ Negpos gallery ” in Nîmes, France;

The candidacy file must include :

1. A non-refundable entrance fee of 15€ must be included with each submission to be eligable.

Galerie phot’oeil as well as the contest “I.P.C” are strictly non-profit. The galerie phot’oeil is mainly funded by donations, sponsors, entrance fees and the voluntary work of numerous helpers and benefactors. The entrance fee helps us to pay the costs of prints, frames, promotion and administration of the contest.

2. Please include your payment receipt and fill in the entry form.

3. A statement describing the artistic goal of your images.

All submitted pictures have to be labelled in the following manner:

No entry will be considered unless the submissions are complete as stated.

No files will be returned.