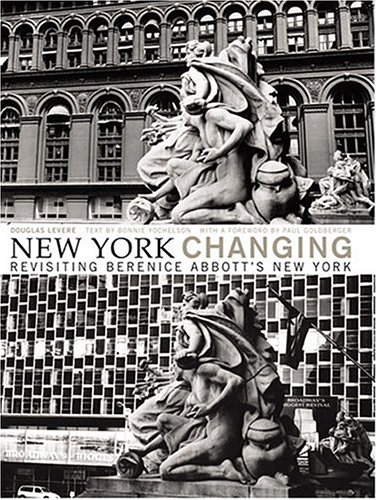 Real progress is something that needn't be commented on; it is simply self-evident. That's the principle behind this elegantly understated book, which places photographs taken by photographer Berenice Abbott in the mid-1930s alongside present-day photos of the same locations shot by Douglas Levere, whose work has appeared in such magazines as Forbes and People. In some cases, the contemporary images are remarkably similar to the Depression-era ones; take, for instance, the New York Telephone Building, which, aside from a new name (Verizon Communications Building), seems unchanged by time. Others are utterly different. In 1937, the Wanamaker's department store occupied the corner of Broadway and east 9th Street, and its façade was covered in billboards; today, a 15-story apartment building and diner stand in that same space. Some duos are similar, but with one altered element—like the absence, in 2002, of an elevated railroad track blazing through Herald Square, as it did in 1936. It's clear that Levere took care to re-shoot the photos from virtually the same angles that Abbott used—which is much easier said than done. The text that accompanies each pair of photos underlies the difficulty of Levere's task. For a photo depicting Fifth Avenue shoppers dashing around, Levere had to rent a double-decker bus, but since he couldn't get permission from the city to stop in traffic, "the bus driver feigned an emergency, placing orange cones on the road and opening the bus hood to allow Levere to take his photograph at precisely 1:10 P.M." This is exactly the kind of scrupulous attention to detail that makes this book work so well. 170 duotone photos. Copyright © Reed Business Information, a division of Reed Elsevier Inc. All rights reserved. The New York Times, December 5, 2004 The before-and-after photographs, facing each other, emphasize New York as a living city of constant change. People Magazine, January 24, 2005 A tribute to pioneering photographer Abbott and to the mutable city. Black + White, February 2005 A fascinating study of permanence and change. Book Description In 1935 the renowned photographer Berenice Abbott set out on a five-year, WPA-funded project to document New York's transformation from a nineteenth-century city into a modern metropolis of towering skyscrapers. The result was the landmark publication Changing New York, a milestone in the history of photography that stands as an indispensable record of the Depression-era city. More than sixty years later, New York is an even denser city of steel-and-glass and restless energy. Guided by Abbott's voice and vision, New York photographer Douglas Levere has revisited the sites of 100 of Abbott's photographs, meticulously duplicating her compositions with exacting detail; each shot is taken at the same time of day, at the same time of year, and with the same type of camera. New York Changing pairs Levere's and Abbott's images, resulting in a remarkable commentary on the evolution of a metropolis known for constantly reinventing itself. About the author Douglas Levere is a New York-based photographer whose works have been published in Newsweek, Business Week, Forbes, and People. Bonnie Yochelson is an art historian and former curator of prints and photographs at the Museum of the City of New York. She has written extensively on New York photography including Berenice Abbott: Changing New York.