Exposition : From the new world by Yang Yongliang 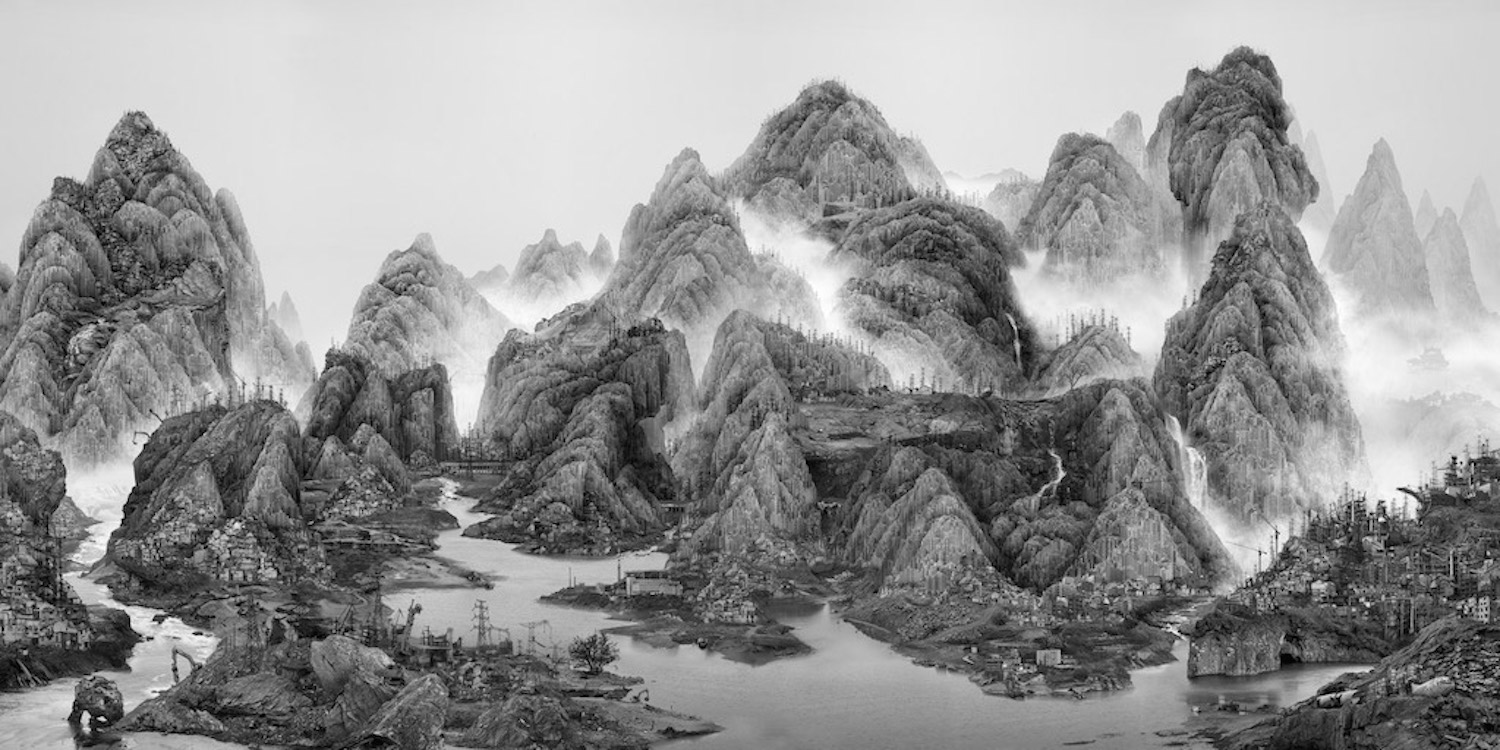 Gallery Paris-Beijing is pleased to present From the New World, a retrospective of the artist Yang Yongliang. Yang's work creates environments that lead the viewer to question what he or she perceives in them: calm or destruction, timelessness or change, peace or threat?

Between enhanced reality and fictional composition, the works of Yang Yongliang recall the lyricism of brush and ink paintings of the Song Dynasty (1127-1129). Indeed, he was a disciple of the calligrapher Yang Yang, with whom he learned the traditional art of Shanshui, literally "Mountain Water" (landscape painting).

His landscapes, typical of Chinese painting, are often composed of trees in the foreground, sometimes accompanied by a learned figure, receptive to the movement of the universe and relishing in his environment. In the background, a mountain fills the entire space.

From a distance, the work reflects the calligraphic influence of misty, heavenly landscapes from ancient times, but up close, we notice that contemporary urban imagery is omnipresent. Like his illustrious ancestors, Yang Yongliang uses composition to mask, in the first instance, the content: this chaotic landscape teeming not with hundred-year-old trees, waterfalls, pavilions and other sacred mountains, but rather with electric pylons, skyscrapers and traffic jams.

His work goes beyond the notion of pastiche in its finesse and its texture. The use of long panoramic scrolls, the printing on cotton paper, the play between detail and effects of scale, the apposition of classic red ink seals, all composed in black and white as if in Chinese ink, make Yang Yongliang's work a photographic Shanshui.

This Shanshui inspiration allows Yang Yongliang to connect the individual to the world and to create this sublime, futurist and secular megalopolis. It encourages an exploration of links with the past, the present and the future, and makes his work a contemporary revival of the art of Shanshui.

With tragic, infinite delicacy, the artist's work reveals to us the great changes that he has witnessed. Hidden away, the industrial aggressiveness and ultra contemporary urbanization are ingeniously integrated into the composition.

Consequently, the Shanshui is no longer perceived as the sublime expression of beauty, but as a tool of mystery and obscurity that raises questions about the distress of nature and of man.

His recent work, From the New World, will be exhibited, as well as the video The Day of Perpetual Night. In them, we will come face to face with the infernal rhythm of these new cities and their artificial lights.

Born in 1980 in Shanghai, the photographer, painter and video artist Yang Yongliang also teaches at the Shanghai Institute of Vision of Art. His works are collected and exhibited at the MOCA (Shanghai), the Bates College Museum of Art (United States) and the Red Mansion Foundation. He was the resident artist at the Gyeonggido International Festival in 2007 and at the Rencontres d'Arles in 2009, where he was selected for the 'New Discovery' prize. His work was recently shown at the Palais des Beaux Arts in Lille, and at the Botanique in Brussels under the title Babel (2012/13).