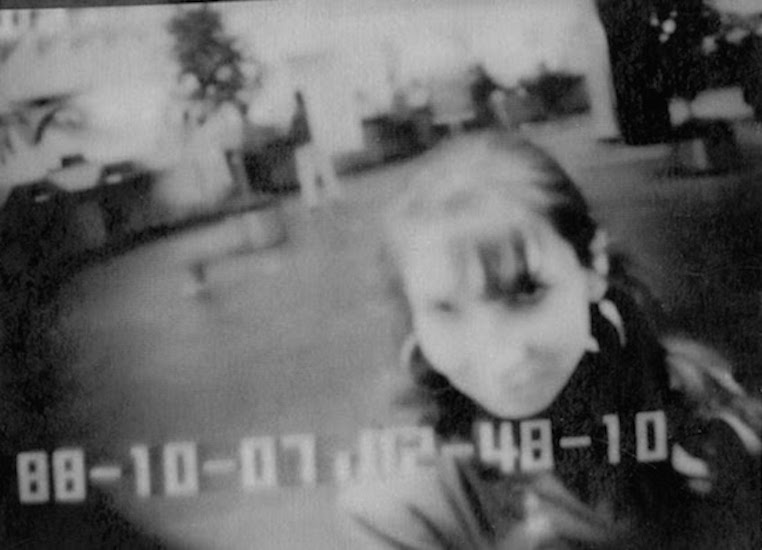 For this exhibition, Calle will cover an entire wall with images from her “Cash Machine” project, which first originated in 1988 and was extended 15 years later with “Unfinished,” a 30-minute film in collaboration with Fabio Balducci. “In 1988 an American bank invited me to do a project. Their automatic tellers had video cameras that filmed clients as they went unsuspectingly about their business. I managed to get hold of some recordings. The images were beautiful but I thought if I just used them as found documents, without adding anything of my own, I would be betraying my own style. I needed an idea to go with these faces. Fifteen years later I decided to go back over my research, delineate the anatomy of this failure and, at last, free myself of these images. Give up before their presence.”
For Calle, these images provided a series of surreptitious glimpses into an everyday experience that resembles the act of entering a confession booth all alone to deposit or withdraw one’s money.

From this starting point, she produced the accompanying work “Unfinished”, where she interrogates human bank tellers about their interactions with money, interviews customers at the telling machines about what goes through their minds while the transactions are in progress, scrutinizes security camera footage in an attempt to discern the motivations of the characters caught on film, and attempts to pawn her personal belongings with sentimental value to a bank. Calle gradually succeeds in unraveling an unsettling portrait of our taboo-tinged relationship to money, how commerce is conducted and how value is assessed in modern day urban society.

Two other works, produced for this exhibition, are poignant investigations into the tacit, often unacknowledged grip that the idea of money exerts on human motivation and behavior :
“Suicide”, “They say the police can distinguish between people who drown themselves for love and those who drown themselves for money. Lovers can change their mind, their fingers scraped from clinging to the piers. Debtors sink to the bottom like slabs of concrete”.
“Secret”, on the other hand, consists of two safes installed in the home of a couple, each one containing a secret related to Calle by the separate partners. “Find a couple. Have each of them tell me a secret. Install two safes in their home. Lock each secret up in its own safe. Keep the codes to myself. The lovers will have to live with the other’s secret close at hand but out of reach.” The fact that neither partner has access to the physical testament of their respective secrets leads to a strange situation in which the artwork cannot be seen in its entirety, but instead has to be guessed without the help of full disclosure.

Also on display in this exhibition is the series “Voir la mer”, “I went to Istanbul, a city surrounded by water, I met people who had never seen the sea. I filmed their first time”, which shows elegiac portraits shot during a trip to Istanbul in 2010. Fifteen residents of the city who had never seen the sea have their astonished reactions captured on film as they partook in this inaugural, life-changing experience. Transforming what would ordinarily have been a simple act into a memorialized ritual, “Voir la mer” captures and relates silently, with only the sound of the sea, the most touching details of an ineffable, seminal experience to someone else.

Since the late 1970s, Sophie Calle has merged image and narration. Her work methodically organizes an unveiling of reality – her own and that of others, while allocating a controlled part of this reality to chance. The theme of absence is central to her work. From the beginning, she has exhibited in galleries and international museums. A major exhibition entitled “A suivre” was held in 1991 at ARC / Musée d’Art moderne de la Ville de Paris.
In April 2001, she presented “Twenty Years Later” at Galerie Perrotin, a project which reactivates that of “La Filature”/ “The Shadow” (1981): “On April 16, 1981, at my request, my mother went to a detective agency. She hired them to follow me, to report my daily activities, and to provide photographic evidence of my existence. Twenty years later, on April 16, 2001, I was followed by a private detective of the Duluc agency who had been hired by Emmanuel Perrotin.” In 2003, a Sophie Calle retrospective titled “M’as-tu vue” (“Did you See Me?”) was organised by the Centre Pompidou (then travelled to the Martin-Gropius-Bau, Berlin, the Irish Museum of Modern Art, Dublin and the Ludwig Forum für Internationale Kunst, Aachen, Germany). For “Take Care of Yourself” at the 2007 Venice Biennale, Sophie Calle invites women to interpret a breakup email. The artist orchestrates these interpretations by combining texts, photographs and videos. This exhibition then travelled to the Bibliothèque nationale de France and throughout twenty museums across the world. More recently, “Rachel, Monique” dealt with the death of her mother. Different versions of the exhibition were exhibited at Palais de Tokyo (2010), the Avignon Festival (2012), the Episcopal Church of the Heavenly Rest in New York (2014), and currently at Castello di Rivoli in Torino, “MAdRE” until 15 February 2015. The exhibition “Last Seen”, recently exhibited at the Isabella Stewart Gardner Museum in Boston echoed a 1991 series of the same title, also linked with Museum collections.

In 2010, Sophie Calle was the recipient of the Hasselblad Award for photography. In the forthcoming months, several solo exhibitions of her work will be on view: “Cuídese mucho” at Museo Tamayo, Mexico (until 1st of March, 2015), “For the Last and First Time” at the Musée d’Art contemporain, Montréal (5 February - 10 May 2015), and a retrospective “Modus Vivendi” at La Virreina, Barcelona (March - May 2015).