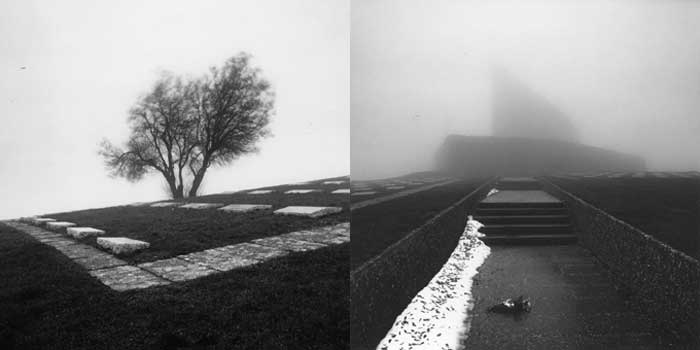 For this Festival, Riccardo Mazzoni (1975) has revisited the Tuscan side of the Gothic Line, tormented at the end of the Second World War. The need for remembrance discovers a profound and silent echo in the empty spaces left by the horror that marked those places. The three words of the title fully symbolise German military strategy applied after September 1944 until the spring of 1945: the Gothic Line was in fact the last front organised by the Nazi army as an answer to the advancing Allied Forces conquering Italy, a series of garrisons and fortifications that were meant to prevent, or at least delay, the arrival of English and American troops in the Pianura Padana, a defence line measuring 300 kilometres, from Massa to Rimini, created following the crest of the Apennines. "In the beginning I felt that to even speak of the Gothic Line was almost like profaning a still necessary silence, since there are few remaining visible traces and most in conditions that render them almost unrecognisable, there are few witnesses left now of what in Italy was one of the most bloody and devastating periods of the Second World War. This was why I started my research in the Futa monumental cemetery where 31000 German soldiers are buried, the only place capable of loudly expressing the real dimension of this event". Museo di Roma in Trastevere Piazza S. Egidio, 1 b 00153 Roma Italia 06 5816563 www.comune.roma.it/museodiroma.trastevere OPENING TIME: Tuesday-Sunday, 10 - 20 closed on Monday (Tickets are sold until h. 19) TICKETS: integrated entrance ticket exhibitions + museum EURO 4 - reduced EURO 3 COME ARRIVARE: Bus: n. H, 23, 44,75, 116, 280, j4 Tram: n. 3, 8