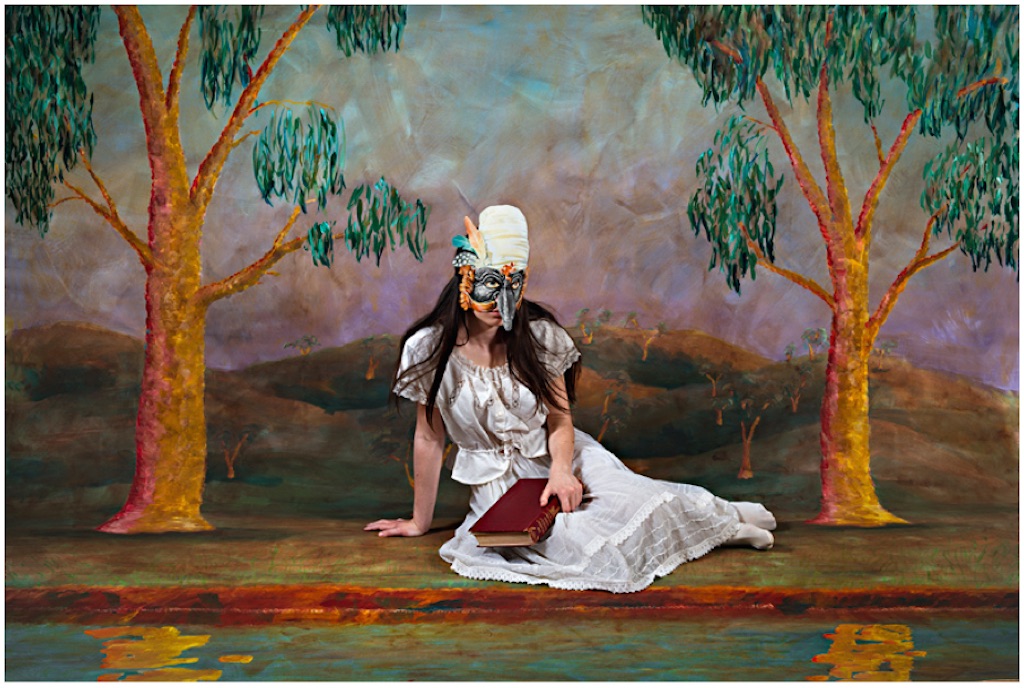 In Lost Psyche, Polixeni Papapetrou portrays emblematic figures that have come to the end of their tradition, their rationale, their place in the world. These intriguing and charismatic characters—the poet, the tourist, the immigrant, among others—bring to life antique Victorian paper masks. Yet, despite being cast beyond our immediate reality, their costumes harking back to earlier times, their settings to fantastical places, these archetypal figures live on in the cultural imagination.

Internationally celebrated for an oeuvre that has consistently tested the boundaries of performance and photography, reality and fantasy, childhood and adulthood, Lost Psyche marks a significant return for Papapetrou. Having extensively explored the Australian landscape as a stage for her photographic fictions, and working in response to the natural and historical dramas of our country, this series takes us back into her studio and the expansive scope of imaginary worlds.

Expressive, luscious and knowingly naïve, the painted backdrops bring to mind the simple seduction of children’s storybooks. At the same time, they reference the painting heavyweights and photographic forerunners that are celebrated within art history. Papapetrou’s image The Duchess, for instance, echoes Goya’s commanding oil painting of the Duchess of Alba (1797). Yet, in this newly imagined version, the ‘role’ of Duchess is playfully acted not endured, and like the melodrama of theatre, the dark sky and downcast actor are softened to become illustrative and symbolic—a scene in a universal story. So too, The Orientalist evokes Felix Beato’s 19th Century photographic forays in Japan, recalling his hand-colouring techniques and depictions of social ‘types’.

Consciously foregrounding this ever-present potential for art to present stereotyped representations, Papapetrou reminds us how these social roles and ‘masks’ play out within our souls and psyche’s just as they do on the cultural stage. As a metaphor for the loss of childhood, a time in which we openly switch between characters, identities and roles, this work evokes the persistence of that imagination, as it lives on within the adult world.

In Lost Psyche, the speculative mystery of ancient roles enjoys a fantastical and touching afterlife. In the contemporary world we may also entertain the inner poet, the storyteller, the clown, the connoisseur, the courtesan, the day dreamer or the dispossessed. They’re all souls with divided emotions, torn between dream and reality, who like us, converge on the collective stage that is the world.